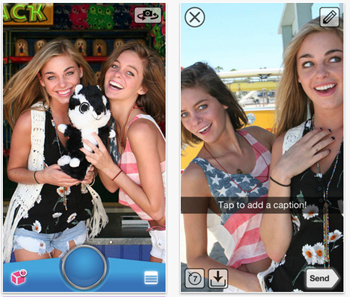 Snapchat looks like it’s becoming more and more popular everyday, and, according to a report out today, is now the top messaging app in North America, generating even more traffic than WhatsApp.

Sandvine’s research, based on monitoring network traffic across a number of its mobile and fixed carrier customers, shows just how important picture and video messaging are, as that’s what Snapchat is all about!

Sandvine writes: “Snapchat has seen high traffic volumes on many mobile networks due to the fact it only allows subscribers to send picture messages, while competing services such as WhatsApp allow users to send plain text.”

This rapid rise in popularity of the app is probably what’s driving the interest from big companies, with Facebook and Google having apparently tried to buy the startup. According to TechCrunch, Google even offered $10 billion for the app at one point!

With the app having recently gone through a massive update, adding video chat and instant messaging, there seems like there’s no stopping Snapchat’s rise in popularity.