Rovio, the developers of the wildly popular Angry Birds series of games have only minutes ago tweeted a teaser image for the next game in the series: Angry Birds Stella. 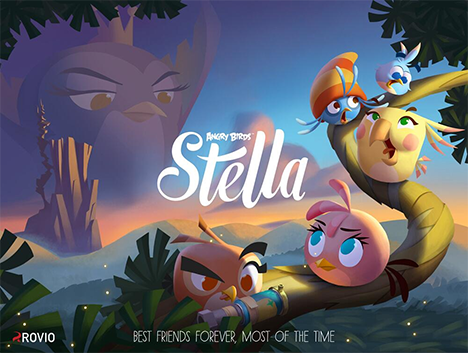 We’re not entirely certain yet what the game will be like – though we would hazard a guess at the game ultimately involving knocking down different structures by throwing birds at them.

The tagline on the poster reveals that the characters are “best of friends forever, most of the time”, and Rovio also tweeted to describe the characters as “friends/frenemies”. I wonder if the bird in the shadows with the arched eyebrows will turn out to be the antagonist?

Meanwhile The Verge quote Rovio’s CEO describing it by saying that “Angry Birds Stella is breaking the [mould] by introducing strong, passionate characters who really stand for something, while adding plenty of action and reality into the mix”, and that the game is “is all about inspiration, empowerment, and other real issues”.

The speculation is that the game will be targeted primarily at women, given the focus on the pink bird character – though to us it carries a stronger suggestion that perhaps the representation of women in games has come little further than Ms Pacman.

It’ll be interesting to see how this lends itself to a mobile. Perhaps Stella will feature a level where you’ve got to fling projectile birds in order to smash the glass ceiling?

The game is expected to land this autumn.