The rumour mill is churning out nuggets at full capacity this morning as chatter about what we can expect from the iPhone 6 does the rounds. Word on the street is that there will be two versions – one of which will be a jumbo-screened phablet. 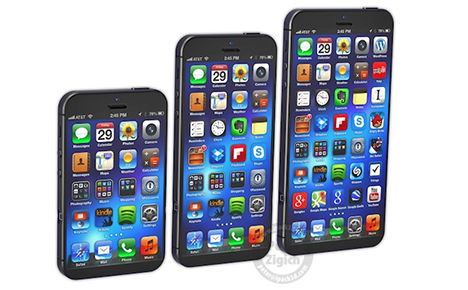 The South China Morning Post are the source of the latest murmurs – though given they’re based in China, where the factories that will be producing the iPhones will be manufactured suggests that they might be on to something – as apparently the design “freeze” – the date by which Apple won’t be able to make any more design changes if they want a September/October release is April… which isn’t too far away now.

So word on the street is that the iPhone 6 will come in two sizes – one the standard 4.7″, roughly similar to what we currently have with the iPhone 5S, and the other 5.5″ – making it the first product from Apple that would fit into the “phablet” (phone/tablet, geddit?) bracket.

It’s an exciting move if true as it would mean iPhone users will be able to use the phone they love, but with none of the, umm, size envy that they might experience when meeting Samsung Galaxy Note and Sony Xperia users.

Apparently it isn’t just size that matters too – the screens on the new devices will be boosted to 441 pixels-per-inch, putting it on a par with the rival Galaxy S4 – and up from the iPhone 5S’s 326ppi screen. The other rumour is that the glass will be made from sapphire crystal, which is apparently second in hardness only to diamond. According to the South China Morning Post, despite earlier rumours, the screen definitely won’t be curved.

Word too is that when the new phone launches Apple will drop altogether the cheaper iPhone 5C, which has seen relatively lacklustre sales figures. Of course – when the iPhone 6 does land though, the 5S will inevitably receive a pricedrop – so would-be buyers may be able to get that instead.

We’ll keep you posted on any more rumours or announcements – but we’re still expecting a release towards the end of the year.