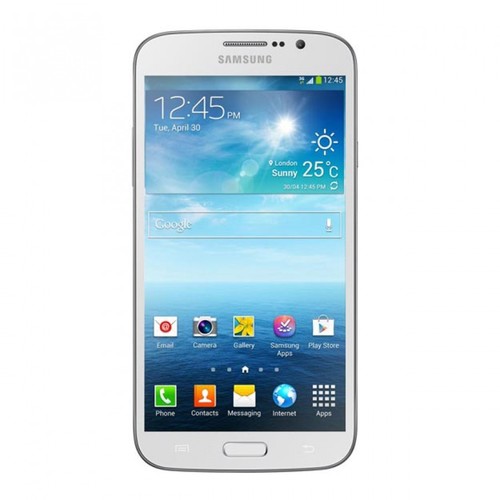 Fancy a really big phone? Well Samsung isn’t just touting its high-end Galaxy S3 Note. There’s also a cut down version – the Mega – which sports a huge 6.3inch display. That’s significantly bigger than the Note 3. In fact only the Sony Xperia Z Ultra – from the big name makers at least – is bigger. Yet the specs, and the price are lower than the Note 3. I get the impression that this is aimed at people who can’t afford both a tablet and a phone. In fact Samsung has even muttered about students being its prime audience.

When you take the Galaxy Mega out of its box, the size is a real shock! It really is almost comparable to a 7-inch tablet…it’s that big. And due to it being so humongous, I found it very hard at first to comfortably hold it. After a while, using it with one hand become easier, although you’ll probably want to use two hands just in case you were to end up dropping the Mega or even causing physical damage to your arm or hand. It’s also worth mentioning that it’s not the lightest of devices at 199g, either.

Looking around the Galaxy Mega, you get a 3.5mm audio jack at the top, with the volume rocker on the left side, the power/lock button to the right, and the micro-USB charging port placed at the bottom – everything placed nicely as they should be! And all the elements are lovely and responsive to use.

Probably the biggest attraction – and excuse the pun – has to be the Mega’s gigantic 6.3- inch display. Sporting a resolution of 720×1280 pixels (note the Sony Xperia Z Ultra and Galaxy Note S3’s screens are both 1080 x 1920 pixels), colours are not only sharp, but they’re also vibrant and bold – perfect for watching plenty of YouTube videos. And thanks to the responsive capacitive touchscreen technology used, I had no problems whatsoever when navigating around the display.

Under the hood, the Mega is powered by a somewhat disappointing dual-core processor clocked at 1.7GHz, mainly because you would expect to see a high-end smartphone, especially a phablet, sporting a quad-core version. But nevertheless, I had no problems when it came to the overall performance – probably down to the fact that there’s plenty of memory (8/16GB) and 1.5GB RAM. It has more than enough oomph for most applications, it just isn’t as speedy and as highly specified as some of its rivals.

While the Galaxy Mega is pre-loaded with Android Jelly Bean, Samsung’s very own TouchWiz user interface is way more apparent. I currently use an iPhone, but I have used a few Samsungs in the past, and happen to really like TouchWiz – I find it sleeker and packing more punch that its HTC counterpart, Sense. Maybe that’s just me, but I just think it is a lot easier to use and really enjoy customising the homescreen with the variation of Samsung widgets that are available to use.

More on the Google side of things, you get access to many of the search engine’s popular apps such as Gmail, Talk and Google Plus, as well as the Play Store where you’re able to download free and paid items such as apps, games, magazines, e-books, music and movies – just like with iTunes.

The stock browser is also impressive. I found it very easy to use and I really liked the overall look and feel of it! Plus, because of the Mega’s huge display, I had no problems when it came to using the keyboard – its keys are spaced out well and it was very responsive. It made messaging a dream, too.

Another thing that I was happy with when testing was the dial pad. Again, just like the built-in keyboard, the keys have been spaced out nicely to ensure you never accidently press a different number. And call quality is excellent too.

Samsung has supplied the Galaxy Mega with a 1.9- megapixel front-facing camera for video calling, along with an 8- megapixel rear-facing sensor and 1080p video recording for serious stills and videos.

When using the camera for stills, I was very happy with the user interface – again, very easy to use – as it should be! And I was well impressed with the quality of my photos: they look lovely and crisp, along with the videos that I took.

When it came to battery life, I never encountered any time where I was faced with the handset running out – unlike my beloved iPhone 5 – this is all thanks to the Mega’s 3200mAh battery.

Personally, I’m a huge fan of the Galaxy Mega and what it stands for. If you want an inexpensive big screen mobile, and aren’t too fussed about the latest super fast processor and the highest res screen, this is ideal.

Review by Nicholas Fearn of GadgetXpert
—