Have you ever collapsed into bed after a long day, ready to fall asleep as soon as you hit the pillow… only to realise that – damnit – you’ve left that lamp on downstairs? I’m not sure this even qualifies as a #firstworldproblem, so much as it is a #sheerlazinessfrustration – but it’s a frustration nonetheless!

You may remember our feature on making your home smarter a week or so ago. We tried to list some of the ways that household gadgets are now beginning to connect up to the internet – but there was one gap. What about electrical plugs? 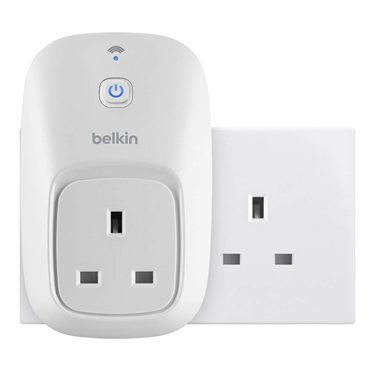 Luckily Belkin have stepped in and have, umm, plugged that gap. WeMo is a range of devices that all connect to your wifi network – enabling you to control them with your phone.

At the moment they have two devices available. The Wemo Switch sits in between your plug socket and something you want to plug into it (say, a lamp), and the Wemo Motion Sensor plugs into another socket and can be used to control the switch.

Setup is super easy – and literally takes seconds. First thing you need to do is download the Wemo App to your smartphone (iPhone or Android – sadly there’s no iPad support yet, but the iPhone app will work on the iPad jumbo-sized).

Next, simply plug the Wemo device into a socket and then use your phone to connect to the wifi network that it generates. Head back into the Wemo app and it’ll detect the new device and let you name it (“Living Room Lamp”) – and even add a photo of the device, and then it’s just a case of selecting your actual wifi network from the list and giving it your passcode, and then you’re done!

What’s really nice is that if you set up a second device on the same app, you won’t have to re-enter your Wifi password for the second device, as it will remember. Which sounds trivial but is a blessed relief when your wifi password is a long string of letters and numbers, and being read off of the tiny text on the back of a router!

The Wemo app is where all of the magic happens. The main screen on the app is simply a list of your devices with a big on/off switch so you’ve got a quick and easy way of toggling devices (for when you’re lying in bed and want to switch the lights off).

You can also set up more complex behaviours though. For example, you can setup rules to toggle things on a timer – so automatically switch on your lights when you wake up, and switch them off again when you go to bed. Wemo is even clever enough to toggle stuff based on the timing of sunrise and sunset – adjusting automatically throughout the year.

Here’s where you can also make use of the motion sensor. The sensor plug itself has a lead on it that connects to a small dongle (about two thirds the size of an egg, for lack of a better reference point) – so you don’t have to make sure your plug socket is uncovered. This sensor can then be mounted where convenient to point at the room.

It’s then possible to create rules that involve the motion sensor – so switch on a lamp if it can detect someone is in the room, and switch it off after 15 minutes of inactivity – that sort of thing. It’s super easy to do – and very clever too.

What’s cool is that once setup, you don’t just have to be at home to use the app – you can trigger switches remotely with it connected when connected via 3G. This means we’re now living in a world when you could conceivably switch on your toaster in London all the way from New Zealand. (Though this might also risk burning down your house).

There’s an added security benefit for motion detection too – you can simply use it to sense when people are in the room. So Wemo can notify you if any burglars have got in – or perhaps more usefully, whether your kids have got home from school or not yet.

My favourite thing about Wemo is that it integrates with Ifttt. For those unaware, Ifttt is a clever service that enables you to hook up lots of different web services you may use. So, for example, you can automatically download photos of you tagged on Facebook to your Dropbox – or have it text you if it’s going to rain.

What Wemo does is open it up to even more possibilities. For example – you can trigger your switches on and off by sending an email, or even a tweet containing a certain hashtag. You can also work it in reverse – so if your motion sensor picks something up, it could trigger an entry into a Google Drive spreadsheet (I wonder if you could set the sensor up to point at the catflap?). Whilst none of this seems immediately useful – this is definitely an exciting possibility to the future, and it’s only a matter of time before there’s some cool Ifttt recipes to use with Wemo.

This isn’t all we’ve got for Wemo. Next year Belkin plan to launch the Wemo light switch in Europe. It’s been out in America for a while, but apparently there’s a trickiness in adapting the switches for the various European voltage standards before it can be released over here.

The light switch is what it sounds like – same technology, but for the lights in the ceiling and not just stuff plugged in at the wall. We hope to give this a try when it’s possible to do so too.

We’re now living in a world where your plugs can have IP addresses – and this is no bad thing. The Wemo Switch can make the most menial tasks easier – and could potentially be energy saving too (how many more people would turn everything off properly at night if it was a single button press away?).

Crucially the price-point is moderately attractive – at £39.99 for a plug it’s not going to break the bank. So it’s definitely recommended – especially if you want your home to be a little more space-age!