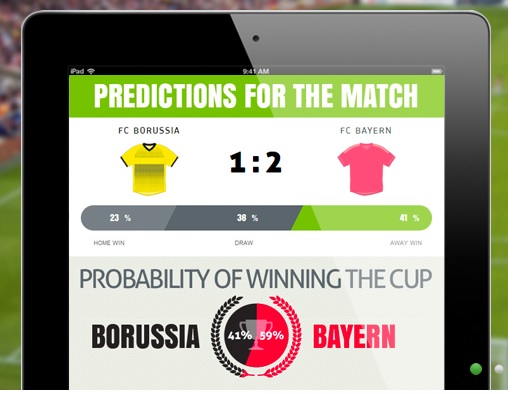 Everyone who loves football fancies themselves a bit of a pundit. Who hasn’t taken on Lawro on the BBC challenge and scoffed at his constant positive predictions for Liverpool FC!

Imagine though if you could use technology to predict the outcome of games, and what if that tech was around 90% accurate? Well thats the scary claim of a new Polish start up called Betegy, which believes that in some games in some leagues it is getting the results right 90% of the time.

Let’s be straight on this, that isn’t the score, but the outcome. So with three possible outcomes the basic level would be 33%.To do this it has developed an algorithm which takes into account team form, player form, motivational factors and even odd stuff like birthday and the weather.

CEO and founder Alex Kornilov told the WSJ “Imagine that, say, Manchester United is playing Liverpool. We know that Manchester United has more players who can strike from long distance. Usually in poor weather the manager will tell players to shoot from further out. Knowing these small things allows us to tweak the analysis in favor of Manchester United.”

You can take a look at how successful it has been too here as there are predictions for a large variety of games.

The company is being taking very seriously too and has struck a deal with a US broadcaster. If you like the look of its predictions too you can take advantage of its betting system which is integrated into its site. It also has some interesting features coming soon, including a personal strategy option that advises you on how to bet, by telling you the stakes and amount to bet, by calculating the risk level and also series of tables and charts that will analyse player and team performances.

Some games, and some leagues, are harder to predict than others. The U.K. Premier league has high levels, since there are a few strong clubs and that gives the league stability, Mr. Kornilov said. “On games that we can call, for some matches we can predict with around 92% to 93% accuracy. For others it is around 55% to 60%.”

It has pulled a few surprises too. At the recent Confederation Cup, Betegy correctly predicted Brazil’s victory, although Spain was widely tipped. The company didn’t quite get the score right (it predicted 2-1; the result was 3-0).

Of course the company can never be anything like 100% accurate, but as pundits go I think I’d trust their algorithms a little more than the whims of an Octopus.