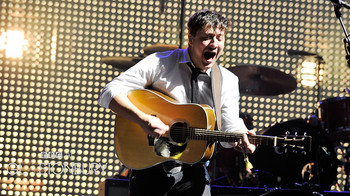 Well as you know all too well the BBC were all over this year’s Glastonbury and today released a few stats about its coverage:

A record 1.5 million unique browsers – an increase of 98 per cent from the last Glastonbury in 2011, this means that not only was there more coverage, there were more people enjoying that coverage.

There was a YouTube broadcast available which claimed around 1 million views with the most popular being The Pyramid Stage with 635k requests.

There were also quite a few video clips available with some of the most popular being Jake Bugg’s ‘Lightening Bolt’ with 70,580 requests, followed by Rita Ora’s ‘RIP’ with 39,280 requests.

The Arctic Monkeys saw more mobile and tablet requests (59 per cent of overall traffic) than any other performance. So now you know what your licence fee is spent on…