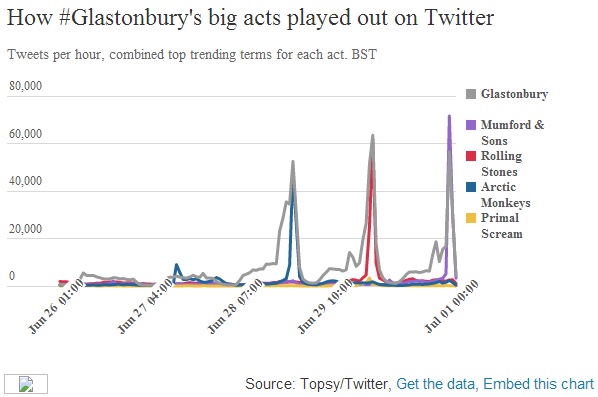 So who was the most popular act at the Glastonbury festival this year? Well it has to be The Stones right whose Saturday night performance was the festival’s biggest, and some have said best, gigs ever.

However when it comes to Twitter the Stones actually ran out in second place. According to research undertaken by MC Saatchi the band that got the most Twitter action was actually Sunday’s headliners – folk pop troubadours Mumford and Sons

The company reports that

At its peak, nine of the 10 UK trends on Saturday night related to the festival.

However on Sunday The Mumfords notched up over 70,000 tweets an hour, nearly 10,000 more than the veteran rockers had the night before.

So how can the Mumfords beat The Stones? Here are few theories

2 A lot of people were tweeting about how much hated the Mumfords. I would love to know the negative/positive sentiment of the tweets on Sunday (how about it MC Saatchi?) The Mumfords really are the Marmite of UK pop.

3 More people were out on Saturday night, whereas on Sunday they were preparing for the return to work with a spot of Twitter powered TV.

Or it could just be that Mumford and Sons are more popular than the Rolling Stones. And on that bombshell…

Heading to #glastonbury ~ despite the heatwave my red wellies are ON! @RollingStones pic.twitter.com/Tzr0uyyb8T