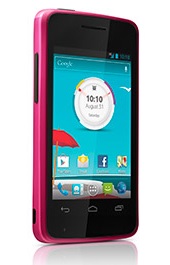 Time was when you couldn’t move for pink phones aimed at young women. Then the iPhone came along and the craze died down a little. Vodafone, however, may be about to bring them back too after announcing that it will have a pink version of its new cheap and cheerful phone the Smart Mini.

With a PAYG price of £50, it’s a mobile that’s aimed at punters who want smartphone facilities but are restricted by a tight budget.

Nevertheless the specs aren’t bad, It runs Android 4.1, sports a 3.5-inch HVGA touchscreen and comes with a 1 GHz single-core processor and 512MB of RAM.

Wi-Fi, 3G, GPS and Bluetooth connectivity are also on board too. Its weakest link is quite possibly its camera which only snap two megapixel images.

And if you don’t fancy a pink version – which will be on sale shortly – you can also have it in black or white.

It goes on sale today.