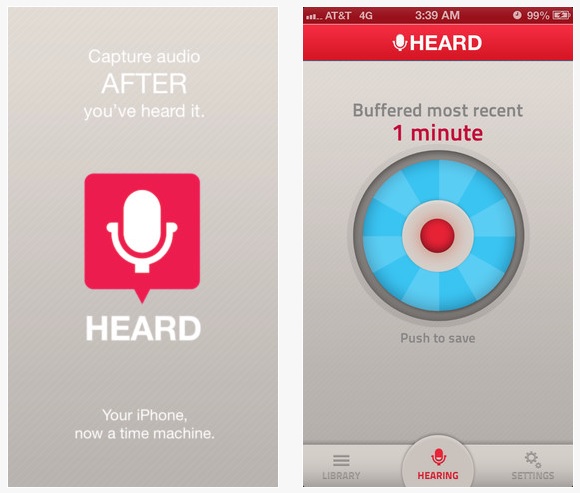 Ever had a conversation and then five minutes later completely forgotten what was said? Well if that’s a regular occurrence for you then you then you might like the sound of a new iPhone app called Heard. Billed as the app that will ‘Turn your iPhone into a time machine!’ it basically continually records the noise, conversations and whatever else that’s in the range of your iPhone’s mic.

But rather than save it all a very long and dull document it cuts it into snippets and automatically deletes the stuff you don’t need enabling you to choose the bits you want to keep by pressing the app’s button.

Heard comes in two guises, a free version which only records up to 12 seconds or the full version which for $1.99 will let you adjust the archive buffer to 30 seconds, 1 minute, or 5 minutes.

It sounds intriguing, but I am not entirely sure how it would earn its keep. Maybe it would be good for journalists and bloggers for on the fly editing of interviews. Or it could have a role for forgetful people who need to access what was said minutes before.

The big question could be what kind of impact the constantly running app has on your iPhone’s battery life. LG is rumoured to be working on a voice control system for its Optimum high-end phones which is also always on. Again there are concerns about its impact on battery life.