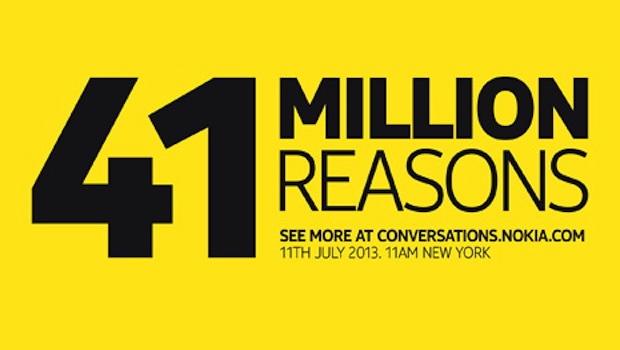 One of the most exciting phones of 2013 looks set to be Nokia’s 41 mega pixel cameraphone the EOS PureView. Except that the handset hasn’t yet been confirmed by the company.

Or has it? Nokia posted the above image on its blog today “41 Million Reasons” in na bid to encourage punters to tune into its launch event scheduled for July 11th in New York.

This follows the teasers that the company sent to journalists last week which had the words “Zoom. Reinvented.”

Basically if it isn’t a camera phone that Nokia is launching in early July then what the hell is it?

In addition to the 41 megapixel camera with a Carl Zeiss lens, which incidentally takes a high res shot for storing and a low res one for sharing simultaneously, the phone also boasts a 720p display, has 32GB of internal storage and runs the latest version of Windows Mobile.

There’s more on the mobile here.