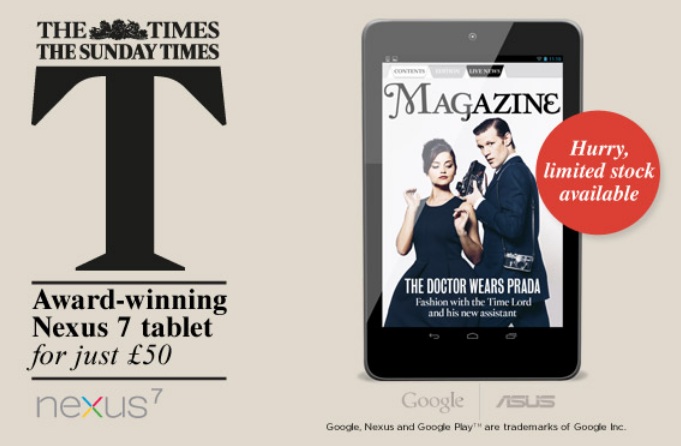 I have always thought that one day publishers would start offering tablets for free as long as you subscribed to their packages. Well, we aren’t there yet, but things are moving in that direction.

The Times has announced that it is offering a special deal to potential readers and that if they sign up for their Digital Pack – basically The Times and Sunday Times downloaded each day to a tablet, plus full website access and the smartphone app – they would throw in a device for £50. In this instance it is is the Google Nexus 32 gig version.

Usually the tablet costs around £200, so that would mean £150 off the tablet’s price.

I think this is just the start. It would make so much sense for say Amazon to offer a free Kindle provided you agreed to spend a certain amount of money on books each year – think a Spotify type subscription.

Then there are other magazine publishers who could in theory offer cheaper tablets as an incentive to pay for yearly subs too. It makes so much sense – if they want to ensure that their tablet readerships goes up why not offer readers a tablet?

I don’t think you will be getting a free iPad with your Daily Star just yet, but if you are thinking about buying a tablet it might be worth seeing if you can get it free or cheap with some great content too.

One thought on “Has the day of the free tablet/iPad with a media subscription arrived?”