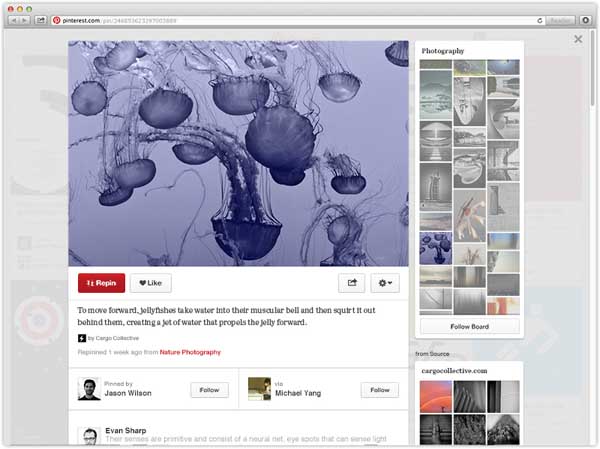 The team at Pinterest HQ have made a number of changes to the virtual pinboard platform since it became super popular a few years ago and now it intends to increase engagement levels and aid discovery even more with a redesign that’s already rolled out to a select number of users overnight. If you’re a die-hard pinning maniac then the changes may dramatically alter the way you use the service, if you’re not that fussed about the crafty platform then they’ll barely be noticeable.

First up there’s what the Pinterest team describe as “more intuitive” navigation options, which basically means there are a few more categories to search through and everything is accessible from just one drop down menu.

However, the biggest change comes when you click on a pin, because now not only are the images larger without the lame white borders, which really plays up to the whole visual focus of Pinterest anyway, but you can now see a lot more information about related pins, pins from the same board and other boards the pin was pinned to. This is a really handy option, because we’ve found over the past few months we’ve just been relying on the same users to give us interesting content, when really the beauty of Pinterest is that it’s so easy to discover new people and ideas. In fact we expect it’ll work in much the same way as YouTube does, as we know we’re not the only ones who’ve been tempted to view video after video after video by the recommendations bar on the right hand side.