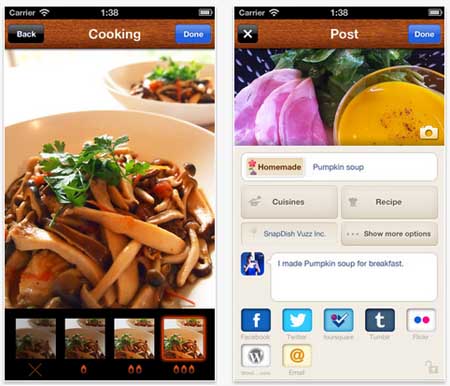 As much as it sometimes irritates us, it’s clear that lots of people just can’t get enough of sharing photos of their food, whether it’s some lame cookies they’ve baked or a big spread at a fancy, pretentious restaurant.

It’s no surprise then that lots of apps have cropped up in recent years to allow people to take photos of what they’ve been eating and one Japan-based offering called Snapdish has now set its sights on the rest of the globe by introducing seven different languages and support for the Kindle Fire.

Snapdish is appealing to food lovers, because not only do you share photos of your food, but you’re also prompted to add in other important details too, like recipes and extra information about ingredients. It’s already a big hit in its native Japan, but now the app caters for lots of different languages, including English, Chinese French, Spanish and Italian.

We’re not sure whether a dedicated application for foodies is really necessary when those who use other platforms and apps, like Instagram, can just follow people who share food photos and have a ready made community at their fingertips. However, it’ll be interesting to see whether Snapdish’s recent added features and growth turns more people onto the idea of exclusively sharing foodies snaps.