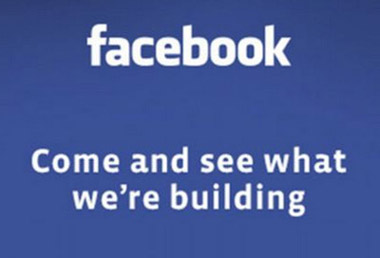 Facebook is holding a big, top secret, super special event at its headquarters in California this evening, which has lead to all kinds of speculation today about what Zuckerberg and the team will be announcing or unveiling to a sea of hard to please tech journalists.

No matter how secretive tech events are nowadays, we can usually all guess what’s going to happen, but so far rumours about Facebook’s shindig this evening range from the social network launching a phone to beefing up its search offering. All we’ve got to go on is the invite that was sent to US journalists on the right, which makes it sound like the team could have been “building” anything from a new app to a bloody castle. So what might happen and what will it mean for us regular users?

We genuinely haven’t got a clue what’s going to happen tonight, but if we HAD to put money on it, then judging from today’s column inches it’s got something to do with beefed up search functionality.

Zuckerberg has mentioned his desire to add different levels of search integration into the social network a few times in the past, but it could range from a comprehensive Facebook-branded search engine, a Quora-style question and answer format or just a few more ways to search the web with the platform’s current Bing tie-in.

Just like the search engine idea, we’ve been hearing rumours about a Facebook phone for as long as we can remember too.

However, we’re pretty sure even Zuckerberg wouldn’t have been able to keep the lid on a finished product without some random piece of hardware from some random factory leaking, so as interesting as it’d be we’ll probably have to wait a little longer for the elusive Facebook phone.

A new way to send and receive messages

Granted this rumour is nowhere near as exciting or clearly defined as a new phone or way to search the web, but given Facebook’s been tinkering around with Poke, rolling out a way for users to pay to send messages and playing around with a VoIP-based calling service, we’d love to see these changes all added to one new messaging package that’ll really change the way we communicate with one another.

Then again the main benefits of Poke have been to send self destructive photos and paying to harass people you don’t know just sounds like a breeding ground for weirdos. GREAT ZUCK, JUST WHAT WE WERE AFTER. NAKED PHOTOS OF STALKERS.