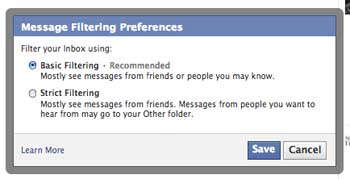 Most Facebook users will find that when they check their Messages they’ve got two distinct inboxes, the regular Inbox and the Other inbox. If you’ve tweaked your settings it may work a little differently, but most people will find that the regular Inbox is full of messages from friends and the Other inbox contains (often creepy) messages from people that you’re not friends with or don’t have any mutual friends in common with.

In our opinion this system works fairly well, after a quick scroll through our Other inbox there’s just a few random “hi” messages, a couple of strange requests and spam. We’re glad all that’s tucked far away from important messages from people we know.

However, the LA Times has reported this week that Facebook could introduce a new feature to allow people to pay for their messages to show up in the regular Inbox of people they don’t know, which sounds really silly and bloody irritating.

The test appears to have only been rolled out to a small number of users in the US and these weird, spammy messages start at $1 to send. In a release sent out this week, Facebook said:

“If you want to send a message to someone you heard speak at an event but are not friends with, or if you want to message someone about a job opportunity, you can use this feature to reach their Inbox.

“For the receiver, this test allows them to hear from people who have an important message to send them.”

Granted they’re all valuable points, but Facebook maybe doesn’t realise there are numerous ports of call for if you admired someone who spoke at an event or want to contact someone about a job opportunity, like oh, Twitter, Linkedin or good old fashioned email.

Facebook seems to be defending the test by saying some people have been annoyed in the past to learn important messages have been sent to the Other inbox, when really it’s just an excuse to bring in a bit more revenue.

One thought on “WTF Facebook: Pay for messages to show up in a nonfriend's inbox”