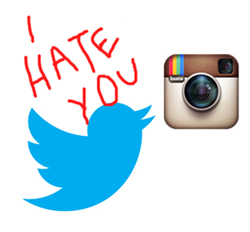 We know the relationship between Twitter and Instagram has been rocky for some time, but this week it looks like things have really taken a turn for the worse. According to reports, Facebook-owned hipster photo app Instagram has had a big tantrum, which has lead to it blocking Twitter from displaying its images correctly. From what we can tell some still look alright, whereas others are weirdly cropped and are just generally a bit rubbish.

The Wall reports that the move is to ensure more users visit Instagram’s new web presence instead of just checking everything out in Twitter. Awh someone’s feeling a bit needy.

“Really it’s about where do you go to consume that image, to interact with that image. We want that to be on Instagram. What we realised over time is we really needed to have an awesome web presence.”

Many have criticised the move and accused the Facebook team of putting pressure on Systrom, to which he replied:

“This decision is definitely coming from me. This is not a case of Facebook putting some sort of policy on Instagram. And this isn’t a consequence of us getting acquired.”

[Via The Wall Blog]