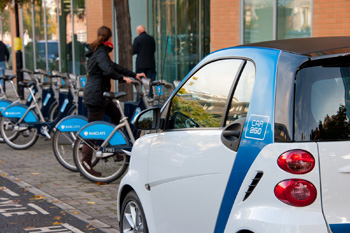 Super simple car-sharing service car2go has launched in the capital this week, bringing a fleet of smart cars to Londoners who want to get around but don’t want the hassle of looking after and paying a small fortune for their own wheels.

The car2go service from Daimler and Europcar works a bit like the popular Barclays “Boris bikes” we’re all so used to seeing whizz around London. You register with car2go and you’re sent a membership card, you then locate a car and activate it by swiping your card against the reader on the window, drive it around as much as you like and then return it to any “Home Area”. As we’re such geeks here at Shiny Shiny, we were really happy to hear that there’s an app to makes the whole process even easier too, allowing users to locate the nearest available car2go car wherever they are.

The service is already popular in 16 cities across the globe and it’s now here in London after being initially rolled out to the boroughs of Islington and Sutton to begin with.

“A lot of Londoners don’t need or want a car all the time but enjoy the freedom that driving brings. car2go gives the best of both worlds – the ability to go where you want, when you want – and in comfort – but without all the costs associated with owning, running and insuring a car full-time.”

That’s essentially what’s made Boris bikes such a staple part of London transport. It’d be great to have a car, bike or even some crazy helicopter all the time, but we’re busy, we don’t have much space and wow can us Londoners drink, so we’re just broke most of the time anyway.

As you’d expect car2go isn’t dirt cheap, it’ll cost you 35p per minute to drive around the city, which will be billed directly to your account. But for the odd important journey and taking your Christmas shopping home without losing the will to live on the bus, it’s totally worth it.

However, it’s not just all about saving you money and allowing you to be lazy now and again, the car2go cars are based on the smart mhd, an efficient, compact two-seater which emits just 98g/km of CO2. So you’re kinda doing your bit for the environment too by not blowing what little money you have on your own car. Or at least that’s what we’re going to tell ourselves next time we hop in one…

There are a number of similar car-sharing services available, especially here in London, but car2go is arguably the most user-friendly, allowing you to just swipe in and out of cars when you need to with ease.

Of course we don’t imagine every Londoner will be battling for the car2go vehicles from the word go as much as they did (and still do) for the Boris bikes, but for one-off journeys they’re a perfect solution and much cheaper than owning an actual car.

Until the end of this year customers can register for car2go and get 30 minutes of driving loaded onto their accounts, so if you’re interested sign up soon.

One thought on “Car2go comes to the UK: Will the "Boris bikes for cars" service be a hit in London?”