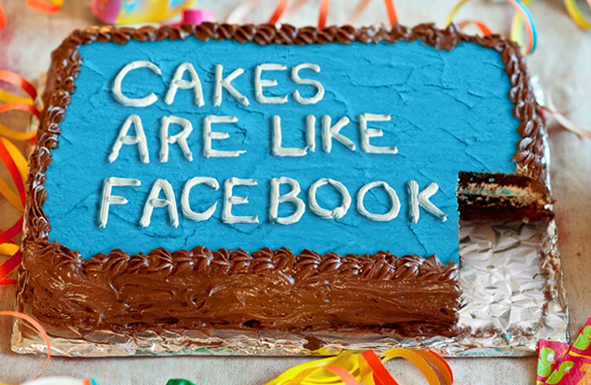 Most of you will have seen Facebook’s efforts to compare the social network to all kinds of things on its official page. For instance, did you know Facebook is just like Halloween? A swimming pool? A chair? No neither did we, but the quirky new “Facebook is like…” campaign has certainly got people talking for all kinds of reasons both good and bad.

The most recent comparison has been between Facebook and a birthday cake, because according to the team:

“Birthday cakes are made for people to be together. They give friends a place to gather and celebrate. But too much cake probably isn’t healthy. So birthday cake is a lot like Facebook.”

That’s a pretty fair statement, but also suggests those at the social network are well aware that too much Facebook time isn’t a good thing. So here are our top five tips and Chrome plugins for kicking your Facebook addiction and stopping it driving you crazy on a daily basis.

1. Block out the things that annoy you

If it’s not your Facebook addiction that bothers you but the fact certain things on the site make you angry, then just remove it all. Simple.

There are specific Google Chrome plug-ins to get rid of most awful things already, like mentions of Chris Brown (Chris Brownout), baby photos (Unbaby.me) and politics (unpolitic.me). However, if you’ve got a specific bugbear then In My Words is for you, as it’s a Chrome extension that allows you to replace any word or phrase you don’t like with one you do.

2. Cut down on stalking by only visiting Facebook when you’ve got notifications

If you find yourself aimlessly scrolling through photos of people you don’t really give a crap about, then instead only allow yourself to visit Facebook when you’ve got actual notifications to check out.

Facebook Nanny only allows you on Facebook for 15 seconds if you don’t have a message, like or comment and even if you do you’ve only got a minute to look at it. It’s a great option during the day when you want to stay on top of things but don’t really have much time to spare.

If you just want to stop spending so much time on Facebook (or any other site for that matter) then download the StayFocusd plugin and just give yourself a few minutes. You might still stalk, procrastinate and get angry, but the less time you spend doing those things the more likely you’ll not want to do them in the future. Maybe.

4. Delete, block and sort your “friends”

You can whine about Facebook all day, but unless you have a personal issue with Zuckerberg it’s really the people you have as “friends” that get to you. If you’re stalking someone too much block them so you can’t see them or anything to do with them, if someone’s annoying you hide their updates or delete them. It’s not rocket science.

Sort people into lists too, so you can share content with who you want to and never feel silly about an update that your boss may or may not have seen.

5. Turn off all push and email notifications

We’ve all been there. You’re finally in the zone, getting on with work and being really awesome when a notification pops up on your phone about that girl from school commenting on your status and you suddenly wonder what she’s up to, what she looks like now and who she’s dating. It’s then not long until you’ve fallen into the Facebook rabbit hole and said goodbye to an hour of working time. Turn off all notifications so that you can look when you want to and when you’re working you won’t be distracted.