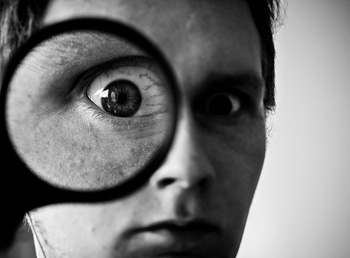 Do you remember a few weeks back when people started to notice their private messages were (maybe) being published to their public Facebook timelines? We all collectively freaked out, dashed to somewhere with wi-fi and checked through the past few years to see if anything was out of place (and we know we weren’t the only ones).

Now all of the was-it-or-wasn’t-it-a-privacy-breach mayhem has calmed down we’ve noticed that there are a lot of people who are really wary about Zuckerberg and the gang over at Facebook HQ and there are a whole bunch of conspiracy theories about what the social network has been up to with all our private information.

We’ve collected together some of the top reasons for you to freak out, from the things that are probably true, like profiles being deleted by accident, to the completely ridiculous Loch Ness monster-style theories, like it was set up by the CIA to spy on you.

FYI, we’re not claiming any of them are true, we’re just presenting them to you for you to make up your own minds…

It’s the most recent one to rock our little social media worlds, despite the fact it probably (maybe) didn’t even happen.

So a few weeks ago Metro France reported that old private messages were suddenly appearing on user’s timelines for all of their friends to see.

Although the rumours began over in France it wasn’t long before people from all over the globe were scrolling back through their timelines (most of the problems seemed to occur in 2007, 2008 and 2009) and finding that some of their once private messages had been made visible.

After an official statement from Facebook it seems the messages we were all getting worried about were just old wall posts that were written back when we were all naively using Facebook and writing about all kinds of private things in such a public way. Awh what excited little mites we were.

There are still those who are adamant their private messages were on display, but with no conclusive evidence or screenshots to prove anything it’s kind of been forgotten about/swept under the carpet.

2. RUMOUR: Facebook will soon charge you to be part of its annoying, elite community

We’ve all had an annoying friend who’s posted a status update about Facebook charging for its services in the near future. That’s fair enough. The world is a big, bad, scary place and why wouldn’t Zucerkberg monetise Facebook one day? However, what annoys us the most is when they write that you have to put something ridiculous as your status to stop it happening or turn your profile photo pink. No guys, it’s BS, get off Facebook and join a cult.

FACT OR FICTION: FICTION. At least for now.

3. RUMOUR: The Facebook team are reading your private messages and increasing page likes

Last week The Next Web (and a number of other sources) revealed that if you mention a Facebook page in your private messages the likes for that page will increase. Admittedly it sounds a little innocuous at first, but surely it means someone’s going through your messages and looking at the content, right? RIGHT?

Well Facebook admitted that it has been scanning messages but don’t worry, Mark Zuckerberg doesn’t give a crap about who you’re dating, it’s only to create those cute little thumbnails that come up at the bottom and the increased likes are apparently a bug…

FACT OR FICTION: FACT but it seems like a genuine mistake. We think.

Every few weeks there are details about a Facebook page, profile or group being wiped off the face of the internet for good. Sometimes the Facebook team has valid reasons for its actions, like a fake or offensive account, sometimes it tries to justify its crazy deleting activity, like in the case of The Cool Hunter page disappearing and other times it just seems personal, like when another Mark Zuckerberg suddenly found his profile defunct. We smell something fishy here.

FACT OR FICTION: FACT with both valid excuses and suspicious circumstances.

5. RUMOUR: The Facebook team are disgusted by your breasts

Earlier in the year a number of “lactivists” (yes, that’s a word) were angered by the fact Facebook has been marking breastfeeding photos as unsuitable. Many have taken it as a personal insult to the natural act of breastfeeding, but really Facebook has just been trying to keep everyone happy and no one likes bare breasts, right?

FACT OR FICTION: FICTION, the Facebook team don’t hate breasts (some might, we’re not quite sure) and the actions may have angered some mums, but at the same time it does make sense that the images were removed. At the end of the day not everyone wants to see your naked body, even if you think it’s a beautiful and natural process. Put ’em away.

When Facebook updated its terms of service back in 2009 many started question whether users really own their content once it’s uploaded to the site or whether it becomes fair game as soon as it hits the social network.

FACT OR FICTION: FICTION. Although the terms of service are constantly changing, the team stand by the fact that a user owns their own content and would never give an advertiser or the media access to content that you wouldn’t be able to find publicly. Look at the case of Gawker’s Nick Denton, who posted photos from someone else’s private account and got into a spot of bother.

7. RUMOUR: Facebook is constantly publishing your phone number for everyone to see

It’s happened a few times now, but most notably last year when people realised that if you sync your Facebook contacts to your phone you see everyone’s numbers. Some people freaked out and thought it meant that Facebook now has all of your personal data, is publishing your details for the world to see or intends to prank call everyone you know in their sleep.

FACT OR FICTION: FICTION. If your phone number has shown up on Facebook at any point it’s because you added it there and at some point didn’t restrict your privacy enough. Pure and simple. Here’s a statement from a Facebook spokesperson on Gawker about the whole debacle:

“The phone numbers listed there were either added by your friends themselves and made visible to you, or you have previously synced your phone contacts with Facebook.”

OK you told us. Calm down.

8. RUMOUR: Facebook will delete you if you don’t republish that really ridiculous and misspelt status update

Yep, it’s the same person who bought into the “OMGZ FACEBOOK IS GONNA STRT CHARGING US” rumour. Every week there seems to be another load of crap circulating round that if you don’t republish this link or that update you’ll get deleted or killed or worse. You can tell which updates these are because a) they’re obviously not true b) they’re littered with spelling mistakes c) they’re people you desperately want to delete from you friend list but can’t because you used to work with them/are related/have a good friend in common.

9. RUMOUR: You can tell who’s been stalking your Facebook profile

It’s probably the oldest rumour around and there are entire sites and forums dedicated to whether you can tell who’s been looking at your profile or not. Yeah maybe it’d be interesting for like five minutes, but are we really THAT bothered?

FACT OR FICTION: FICTION (probably). Even though many believe there are tricks and formulas for working it out, if Facebook is to be believed, there’s no way of telling who’s been looking at your profile. Sorry guys.

10. RUMOUR: Facebook was set up by the CIA to find out more about you.

Yeah, sounds like something out of a crazy thriller movie, right? But Google it. There are LOTS of people out there who don’t buy into anything Facebook stands for and are convinced it’s been set up by the CIA to find out all kinds of things about us. We’re not sure what it hopes to achieve by learning we get drunk a lot and take photos of our cat, but SRSLY some people seem to take this conspiracy theory really, well, SRSLY.

FACT OR FICTION: FICTION. We’re totally willing to be proved wrong here (and we’re sure many people out there will try to), but we just don’t buy it. Sorry.

Related: FACEBOOK: What does the (maybe fake) private message leak teach us?