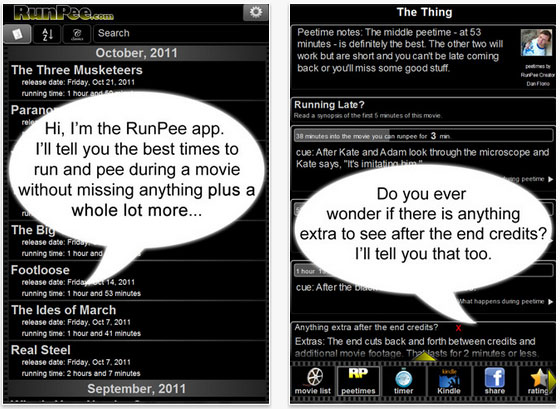 We’ve all done it. You’re sat in the cinema watching that film you’ve been waiting to see for months and think you can run to the toilet super quick without missing the best bits. Then you return and two people have been killed, there’s a weird talking dog running the show and one guy’s an alien. FFS.

Well next time you take a trip to the movies fear not, the RunPee app is here to allow you to run, pee and return to the film without missing the vital bits. Tap into the film you’re going to see (nothing too arty, obscure or exclusive though) and the app will serve up a few options for optimum toilet time.

You don’t have to have your phone out waiting for the notification, it’ll cause a vibration at the beginning and end of the “pee window”, so you know when to get going and when it’s too late.

Once you’re back RunPee will still give you a brief synopsis detailing what you’ve missed and also tells you whether there are any extra scenes after the credits that are worth sticking around for too.

OK so some people won’t need it and others will think it’s just a bit stupid, but if you’re a movie fan and enjoy attending the cinema a lot you may find it really useful and worth the 69p it costs to download it.

RunPee is available from iTunes for 69p.

One thought on “RunPee: Run, pee then get back to the movie without missing the best bits”