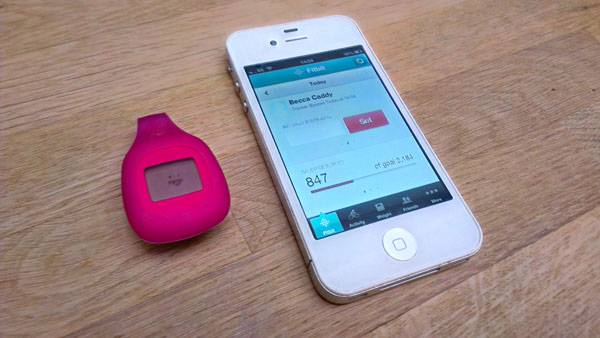 Fitbit’s original Fitness Tracker was one of the first gadgets of its kind to give regular people (not sickeningly fit athletes) a way of tracking their activity throughout the day. Fast forward to today and there are all kinds of monitoring and fitness tracking devices on the market, so in response to the slew of new rivals Fitbit has changed its game a little, redesigning its first product to the tough and slimline One and the budget Zip, a souped-up pedometer. With a face.

The Zip is a rather basic option in comparison to the brand’s previous gizmos, with a much more affordable price tag. However, it’s not just like a regular pedometer because it’s been built solely for those who want to not only just count their steps throughout the day, but keep an eye on their calorie intake and take a closer look at their daily data via the comprehensive Fitbit app or web dashboard with sharing and gaming features too.

The actual gadget is around the size of a 50p piece and measures less than an inch. It’s tiny, but also comes with a silicone holster, meaning you can attach it to your clothes. It comes in a range of candy colours, which on the press materials where there’s an army of ’em looks a bit garish, but kinda cute on their own. We have a magenta one and we don’t know whether we love or resent the fact a little pink gadget is (quite literally) staring at us from our crotch area, but we’re not going to read too much into the connotations…

The Zip has a stamp-sized monochrome screen, which you simply tap to display different results, like calories burned, distance travelled, steps taken, the time and a little smiley.

Just like Fitbit’s other products, you can attach the Zip to your trouser pockets, your bra or anywhere else that’s “clippable”. Due to an incident on the tube with the Ultra on my bra (it fell off, I had to put my hand up my top, I was scarred for life, so was everyone around me), I opted to clip it onto my trouser pocket and it felt fairly secure most of the time, but did pop off now and again. I don’t know if I’m just particularly active or that’s a bit of a flaw in the design. Although you’d expect a fitness tracker to withstand all manner of physical activity…

In the box with your new Zip you’ll find a tiny receiver that slots into one of your computer’s USB ports, just attach that and the Zip will use Bluetooth to sync up with either an app on your phone (only iOS devices for now, sorry Android users), a web dashboard or both.

We like that you can earn little badges for certain achievements, which some may find annoying but we know will encourage many to want to earn more, keep checking back and maybe walk instead of get the bus. Maybe.

The step tracking was fairly accurate, although you can go into the web dashboard and add in your stride length if you feel like it and want an even more accurate reading.

Obviously the Zip can’t watch and monitor what you eat, so you’ll have to manually add in your meals and snacks too and then the device will measure calories burned accordingly.

The Zip runs off a simple watch battery, which Fitbit claims will keep your Zip zipping for four to six months, but we just wonder whether anyone will be bothered to add a new one once it’s started dying…

So come on then, adorable but pointless? Or useful?

Well, all of the above. The Zip is really accurate when it comes to tracking your steps throughout the day, automatically syncs without fail and we can’t get enough of the fact that you can tap the screen to see different types of data.

The only drawback of the Zip is the design of the silicone holster, we’re not sure how it could be more secure, but attaching it sometimes just doesn’t feel safe enough and there were nearly a few accidents when the poor, smiling, little Zip could have been left all alone on the pavement. FOREVER.

We also wonder whether we’ll keep up with it, attaching it everyday and removing it from clothes so it doesn’t get put in the watch seems tedious and makes us wonder whether devices that you actually wear, like Nike’s FuelBand will suit some people much more.

You can buy the Zip in a range of different colours from the online Fitbit store for £49.99.

One thought on “REVIEW: Fitbit Zip makes fitness adorable, but is it really useful?”