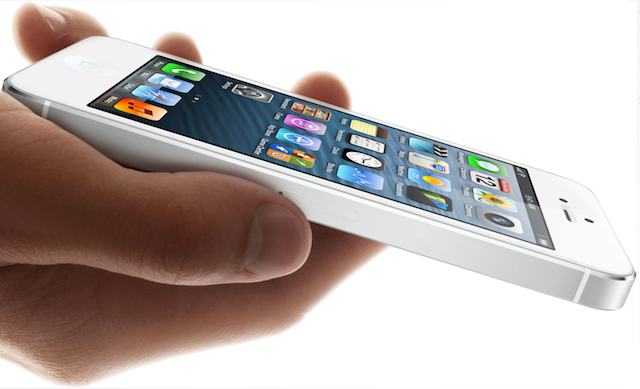 At an exclusive event in San Francisco today, Apple introduced the highly anticipated iPhone 5 and here are some of the quick and dirty details about the specs, main features and release date of the lighter and slimmer handset.

Phil Schiller, the Senior VP of Marketing at Apple, said “it’s the world’s thinnest smartphone” at 7.6mm and it weighs in at 112 grams, making it 18% thinner and 20% lighter than the iPhone 4S.

Schiller assures everyone that apps won’t look stretched and developers don’t need to make any changes despite the larger screen, before giving the audience a demo of some popular applications.

There’s also 44% more colour saturation in the display, with touch integrated into the screen to reduce glare in sunlight, which Schiller says is “truly the world’s most advanced display, and we couldn’t be prouder of it.” Awh.

Network: LTE 4G and EE in the UK

The iPhone 5 is LTE capable, supporting HSPA+ and DC-HSDPA and 5Ghz WiFi. There’s been some information about the carriers and here in the UK it’ll be available via EE (formerly Everything Everywhere), our first 4G network.

Processor: Faster with A6 chip

Everything now runs off the new A6 chip, which Apple claim is 2 times faster than the A5 for both CPU and GPU processing. 22% smaller and more energy efficient than the previous chip, apps can now load as much as 2x faster. Console-quality graphics will be possible, according to EA’s Rob Murray, who demoed the Real Racing 3 app game on the new iPhone 5.

The iPhone 5’s camera is still packing an 8MP sensor with backside illumination, like the iPhone 4S, but with a dynamic low light mode to add to the 5-element lens and f/2.4 aperture.

There’s an awesome new panorama feature, with a 360-degree shot resulting in a giant 28 megapixel image. Apple says, “it’s even able to determine a non-linear path if you’re not able to hold it exactly steady” and if something pops up into the screen temporarily, it’ll apparently be able to remove it.

The A6 chip allows for faster photo capture too, as well as a smart filter for better colour matching and reduced noise. Share Photo Streams allow you to share photos with pals, and receive messages on your snaps too.

There’ll be 1080p HD video capabilities, improved stabilisation, face detection and interestingly you can take photos while you’re recording too.

The iPhone 5 has three microphones, one on the front, one on the back and one at the bottom.

The speakers have five magnet transducers, up from the iPhone 4S’ three and the earpiece has noise cancelling.

It’s been one of the most widespread rumours in recent months and Apple has now confirmed that the connector is about to see a big change. It’s called Lightning and it’s the 8 signal design we’ve all seen from the leaked images. It’s 80% smaller, helping to keep the overall design smaller, as well as offering faster data transfers, and is “reversible”, meaning it can be plugged in when either facing the front or back.

An adapter is being released to make sure all of the accessories you spent a fortune on won’t now be completely redundant.

The iPhone 5 will be available in both black and white with a silver aluminium finish, though the rear panels will be different on each. The white version has a raw aluminium back plate, while the black version has an anodised black finish on its rear. 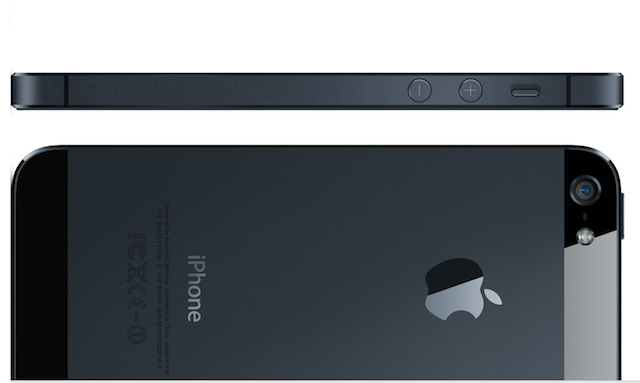 As we expected from WWDC 2012, the iPhone 5 will be running iOS 6, at the event the team showed a demo of Apple’s new maps feature, as well as deeper Siri integration and FaceTime without the need for Wi-Fi.

Even with LTE connectivity, 225 hours of battery life on standby are quoted, with 8 hours 3G or LTE talk time, and 10 hours Wi-Fi usage.