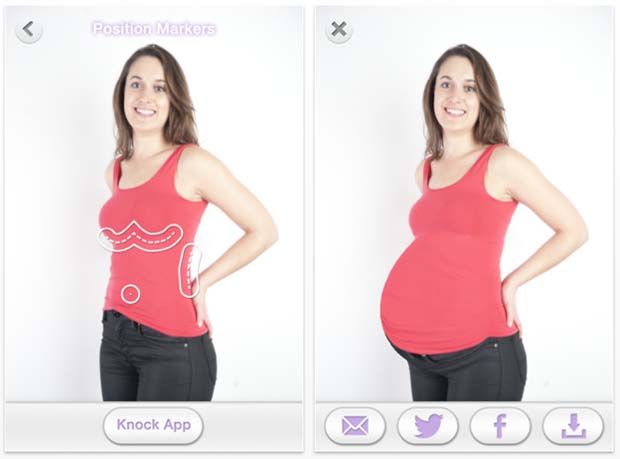 A new app has been released by Sydney-based Appy Dude (we hope his name is already ringing alarm bells) that’s caused a lot of controversy over in Australia because it allows you to impregnate people.

No, no, it doesn’t turn your phone into some kind of twisted sex toy from the land of Saw, it’s just like those other 35,874,093 apps that let you make someone fatter or give them a huge nose, but instead it makes their stomach look like they’re nine months pregnant.

The app called… wait for it… Knocked App (we couldn’t make this up) has caused a stir amongst family planning groups for being insensitive and trivialising the very serious issue of teen pregnancy, whereas the developers have clearly pulled out the “awh it’s just fun and totally harmless” card.

Now we know what some of you are thinking, come on, it IS just harmless fun, right? Well yes, we get the arguments in defence of Knocked App (do we have to say it AGAIN?), we’ve all tried those silly apps that add 100lbs to your friends or show you what you might look like in 80 years. But you know what? They get old VERY quickly and you soon realise that you’re not 12 years old and it’s the modern day (and slightly more realistic) equivalent of just drawing someone with a crayon with a dick on their head. Or something like that.

But Appy Dude’s argument is kind of all screwed up, because he suggests people are already using the app to terrify the living crap out of people:

“We really just wanted to give people a laugh. It’s had an amazing response. It’s all over Facebook with teenage girls scaring their mums and stuff like that.”

We also don’t like Appy Dude’s approach to dating either, although that’s hardly a surprise, as he says:

“You can meet someone and conceive with them with just the press of a button.”

Well Appy Dude, that has always been the dream.