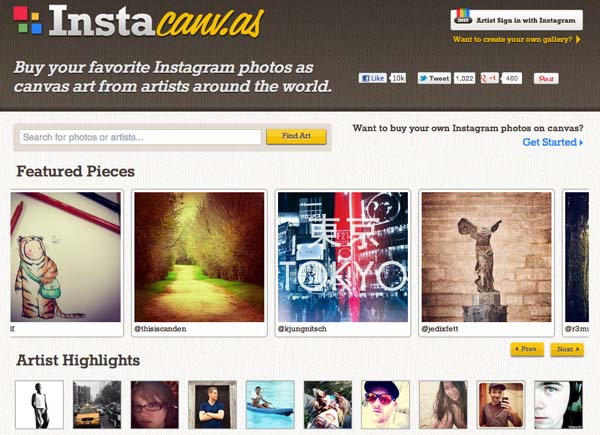 There are a range of different services that promise to turn your Instagram snaps into stickers, calendars and t-shirts, so we’re not surprised to see a new company has popped up that lets you turn them into big, beautiful works of art too.

Every week there seems to be a new company piggy-backing on the success of Instagram, offering users the chance to see their photos on all kinds of useless products that they really don’t need. However, there’s something about Instacanvas that we think could be a bit more successful and appealing, despite the fact its name is sickeningly predictable of course.

If you’re particularly proud of your photos, Instacanvas allows you to have them printed on high quality canvas and sent to your home all ready to hang. However, it’s also a platform for professional artists and photographers who already have a big Instagram following to connect with others who’d like to buy their artwork. In this way Instacanvas becomes an interesting and potentially very lucrative business model for those looking to make a few extra pennies from their awesome photography skills.

You simply sign up and the site builds you your own gallery, along with a vanity URL and you can then pick which of your snaps you want to feature.

“It started with the idea that there are these billions and billions of photos being created every day on Instagram and other social media platforms, and some of us on the team had an interest in selling artwork, and some of us had talked about buying it. And as we looked around all we were seeing on the walls of our apartment was mass-produced artwork that we’d bought at Ikea or Target–things we really had no personal connection to.”

As you’d expect there are a few issues that arise as soon as you start delving deeper into the workings of Instacanvas, for instance, artists make only 20% of the cost of each print. As the starting price is $40 that means only $8 for those behind the image, which is a little bit low, no?

“We haven’t seen any inkling that that would ever change, and obviously there would be an enormous backlash in the community–so in that sense they’d be destroying the value of the entity they’d just acquired…It’s a very different thing the way people use Instagram to take a beautiful picture they want to share with the world verus a picture of your friends having a beer at a party on Facebook.”

Related: 10 Services that turn your Instagram photos into cool products

One thought on “Instacanvas: Turn your Instagram photos into wall art and make a profit”