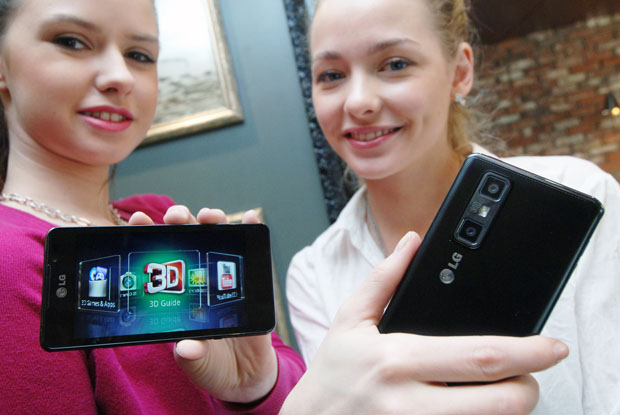 Today LG has launched its new glasses-free 3D handset, the Optimus 3D Max, onto the European mobile market. But does anyone really want a smart phone with 3D capabilities or are we content with boring, flat 2D?

We saw LG’s latest handset at Mobile World Congress earlier in the year and as you can expect it’s all 3D this and 3D that. The glasses-less device allows you to see mapping apps in 3D, edit and capture photos and videos in 3D and for entertainment fans watch your favourite TV shows and films in 3D too.

However, as much as we love 3D here at Shiny Shiny, we’re happy to see there’s a ‘Hot Key’ on the side, which allows users to switch between 2D and 3D, kind of like the dial on the Nintendo 3DS. This is great news for those who feel a bit queasy staring at a 3D screen all the time and need to be able to turn it off as and when.

There are some other cool new features, like an upcoming maintenance release that will include a HD Coverter, so you can watch high-res content on a TV through Mobile High-Def Link.

If we forget about the 3D capabilities of the device, it’s still a decent smart phone. The handset is both slimmer and lighter than its predecessor, measuring 9.6mm and weighing just 148g. It’s got a 5MP camera that captures photo and video content in 3D, a 1.2GHz Dula-Core processor, a 4.3-inch 3D WVGA display with Gorilla Glass and it boasts 8GB of internal storage and Micro SD support. However, it’s running on Android 2.3 Gingerbread and there’s been no official mention of when the update to Ice Cream Sandwich will be coming, which for some may be a little worrying.

“We are deliberately pushing the limits of mobile entertainment innovation with the Op-timus 3D Max.

“This device has evolved significantly since we introduced the first Optimus 3D at Mobile World Congress in 2011. Our second generation glasses-free 3D smartphone is as thin and light as any other high-end smartphone while still delivering a spectacular picture in either 2D or 3D.”

But the big question is does anyone REALLY want a 3D phone or is it a bit of a gimmick from the brand?

If you enjoy shooting video content in 3D or rely on your device for entertainment purposes and love everything Avatar-esque then give it a go. However, for some the fact it’s running Android 2.3 may leave them feeling a little left behind, most would probably be happier with a more advanced smart phone with no 3D screen and others may just have motion sickness from seeing the word 3D far too much in this article already.

Details about where you can pick up an LG Optimus 3D Max to follow later this week.

One thought on “LG Optimus 3D Max: Do we really need a 3D smart phone?”