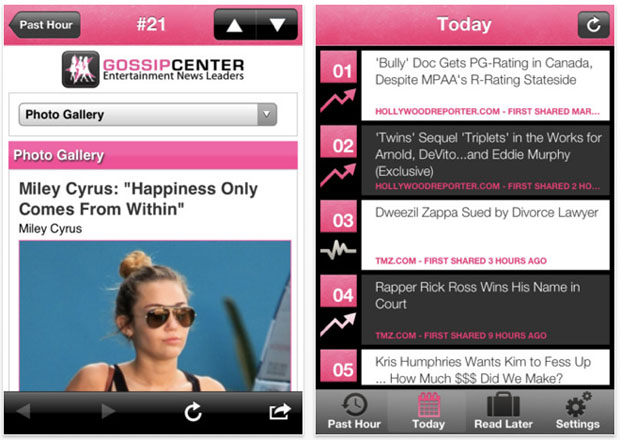 A new app called Currently Famous collects together all of the sleaziest and shallowest celebrity gossip stories from Twitter and delivers them to you in a super accessible (and obviously pink) format that after three days will turn your brain into actual mush (probably).

In our eyes there are a few different breeds of Twitter user, the most hilarious are the marketing and social media types, the tweens who TLK LYK DIS INNIT and of course the celebrity stalkers.

The celebrity stalkers are fascinating specimens. They don’t see Twitter as a promotional tool or a place to gather interesting insight about the world, but as a magical portal between the normal, rubbish world of regular people and the sparkling world of the famous. You can identify them because they’ll mention which celebrities they love in their bio (YES THEY ACTUALLY DO THIS), will have attempted to start a conversation with Kim Kardashian in the past 24 hours, often talk in caps (who does that, right?!), completely lose it when a z-list celeb says thanks for their stupid compliment and are often posing with the peace sign in their default photo.

From what we can tell there are very few apps and services that have really taken advantage of this worrying yet fascinating celebrity obsession that has infected the brains of so many young teenagers.

However, Currently Famous could prove to be really popular among the celebrity obsessives because it collects together top trending celebrity stories so you have to do even less reading than usual. Why don’t we just hook ourselves up to the crazy eye opening machine from A Clockwork Orange, turn on MTV or E! and be done with it?!

According to the app’s developers, it uses a “sophisticated algorithm” to monitor the micro-blogging platform for the latest stories that most users are talking about. For those who can’t go a few minutes without a celebrity fix, luckily Currently Famous is updated every few minutes, giving you a constant stream of (supposedly) the juiciest celebrity gossip. Because why spend time actually working or getting on with your life when you could find out that two minor celebrities had sex in a taxi last night after falling out of a club?

You can browse through all of the latest stories and then save them to read later or share them among your equally obsessed friends on Facebook, or just feed everything back to Twitter for a soul destroying circle of celebrity rubbish.

Avoid Currently Famous like the plague if the Daily Mail’s sidebar of doom makes your blood boil, but download away if your sole aim in life is to get Katy Perry to re-tweet you.

Available from iTunes for Free.