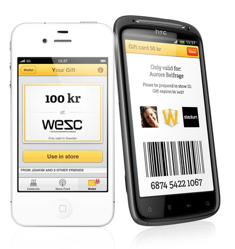 I must admit to being a bit cynical about freebie vouchers. The nibbling fish put me off Groupon and until I get a free coffee every week I am not going to be spend too much time on Foursquare.

However a new app that launched very recently called Wrapp has massively impressed me. At its heart is a very simple, but rather brilliant idea. The app, which has Facebook at its core, enables you to send vouchers directly to your friends’ walls. If they have an iPhone or Android handset they can grab the voucher and get money off at restaurants, services etc

Of course, like Groupon, it needs really good offers to thrive. However that is only half the story. You can also use the service to send proper paid for vouchers of retailers too.

So a classic scenario would be – the app tells you that it is Sean’s bday tomorrow. You haven’t bothered to get him anything and don’t want to spend time looking. You then send him a £20 voucher of his favourite online retailer which lands on his Facebook page. Alternatively if you are skint it is a £3 off Pizza Express voucher which costs you nowt.

The mobile app is also smart in that it keeps you up to date Facebook-style of which birthdays are on the horizon.

Personally I think Wrapp could show a bit more imagination. A deal for free Resolve could be sent to someone after a big night out, or maybe a free video voucher if someone is at home and ill. I am sure you get the gist.

The viral nature of the app – and the way it works brilliantly with Facebook – should ensure they gets lots of users very quickly.

To make Wrapp work though a few things need to happen

1 They need to get loads of good retailers on board
2 The standard of the freebies needs to get better
3 They need to make sure the Facebook wall posts don’t look too spammy – that needs some work!
4 They need to roll it out in the US very quickly. At present you can only use Wrapp in the UK, Sweden and Norway.

If ever there was a case for a service that needed a massive war chest it is this. Spending big on the quality of the retail offering could lead to massive return from paid for vouchers in the future.

Wrapp has some serious backers too including the Skype guys so they really are one to watch.

There’s a good video that takes you through the service at wrapp.com