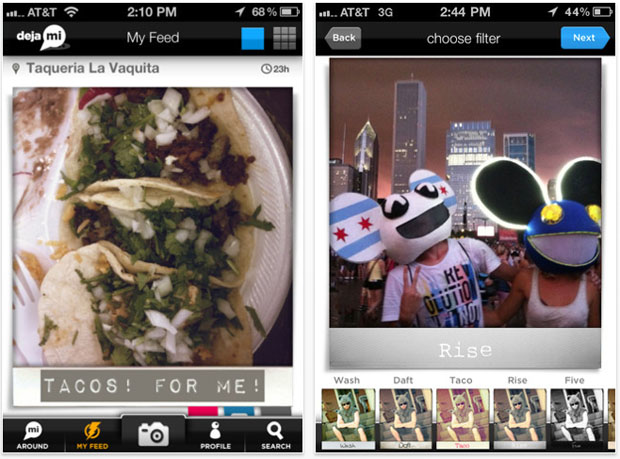 So you update Facebook and Twitter on an hourly basis (OK half hourly), you send your location check-ins to Foursquare, you pose in your fanciest outfit for WIWT, you Instagram your food, tell Path everything and you track your workouts with Nike+. Can you REALLY fit another app into your day? Well yes, we think you can. And you should. It’s called deja mi and it’s a little bit of all our favourite apps rolled into one quirky, funny and ‘nice’ package.

We get asked to trial a lot of apps here at Shiny Shiny and when we went to CES earlier in the year we were told about a new app that was still in development that we could try. To be honest at first we didn’t care about the app, we just liked the fact it was ‘in development’ because it made us feel like we were part of some super secret club. A super secret geeky app club, can you imagine?

When we got back to the UK we thought ANOTHER app? Do we REALLY have to? But being nice here at Shiny Shiny we decided to give it a go and after finding out it had a really slick UI, lots of lovely filters and (most importantly in our eyes) a medal that tells us we’re “a golden egg” we were hooked. 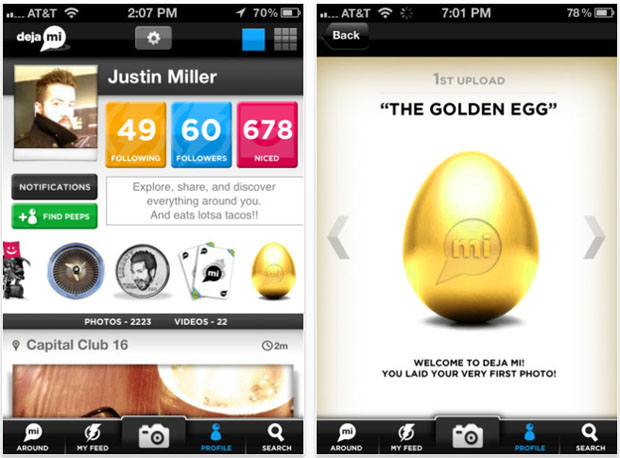 Deja mi allows you to share ALL the cool stuff you get up to in real-time with the people around you, you can take a photo, add a filter, tag a location and add a comment. Oh, and we love the fact the app has a shiny web-based interface too, which already sets it apart from the likes of Instagram and Path. But to find out what REALLY makes deja mi stand out in the pretty crowded app market we spoke to the team about the app, its funny medals, what makes it special and what would make us fall in love with it if it walked into a bar.

SS: Hi deja mi team, give us a bit of background about the app in a breezy tweet-style 140 characters.

DM: deja mi is a simple and fun way to explore, discover, and share experiences
around you in real-time; through crowd-sourced content.

SS: What kinda things can we share on deja mi? Is it restricted to certain experiences or can we just go wild?

DM: Absolutely go wild! We want our users to share their experiences out and about, whether it’s a concert, a night out at a pub, a party, or just something interesting around town. In fact, we reward users for sharing great content by giving them a Best in Show Medals (voted on by the users themselves), which is a fun way to engage people and get them excited about sharing their photos and videos.

SS: How is deja mi different to the other 83, 654,756 apps out there dedicated to taking photos and sharing stuff?

DM: The first major difference is that deja mi is a totally open social network, meaning you don’t need to build yet another network of your friends, but rather engage with any and everyone using the app. When designing deja mi, we wanted users to think of it as a utility for exploring and discovering the space around them, through everyone’s photos and videos, and then giving them the ability to not only contribute within the app but to share content from the app back with their current social networks.

We also wanted to create really fun filters and frames with custom fonts to let the users really make their media stand out, as well as introduce gamification within the app, something we haven’t really seen in the other popular photo sharing apps to date.

SS: Tell us about the development of deja mi. How long has it been going on for? Have you got a big team working on it?

DM: The idea for deja mi spawned from an amazing concert in October 2010, it dawned on us that while we were there everyone else was taking photos and videos that we’d never see again. We spoke about the idea among a few friends a couple of weeks later and started development in January 2011. So to date, 8 of us have spent about a year and a half building this thing and testing the business model.

SS: After trialling the app for a few months we’ve realised you guys have a pretty quirky personality, tell us more about your medals, weird messages and why that’s important/just one big ‘in joke’.

DM: Why not have some fun with an app? We definitely wanted our (funny, quirky, weird) personalities to come through. The push notifications were a big deal since these can often be a little annoying (with some other apps), so we sat down and thought about how to make people laugh (or at least try to). When it comes to the medals, we wanted to really create a wide variety of fun and exciting things to win/unlock. We all love tacos/burritos at deja mi HQ… so naturally we have quite a few medals dedicated to these deja mi staples!

SS: Are there any future plans to make deja mi even more awesome? Will you add more integration with other apps/networks/sites/tools/cool stuff?

DM: Ummm YES! It’s getting more and more awesome by the day. We’ve got some really exciting development underway already (following this initial release) and more ways to utilise the app aside from just a “photo sharing” application. We’re building deja mi up to be a key player in someone’s social life.

SS: Sell us deja mi as if he’s a lonely singleton looking for love. Why should we pick him over everyone else in the bar?

DM: While the others might offer you a beer or cosmo, deja mi is gonna grab two shots of tequila off the bar, and guarantee you are about to have a great time! Maybe you’ll earn a medal for your night out.

We can’t guarantee you’ll swap your current favourite photo sharing app for deja mi straight away, but with an online version, retro filters, a slogan of ‘this is nice’ AND promise of tequila, how could you ever say no?!

Deja mi is available from iTunes for free.