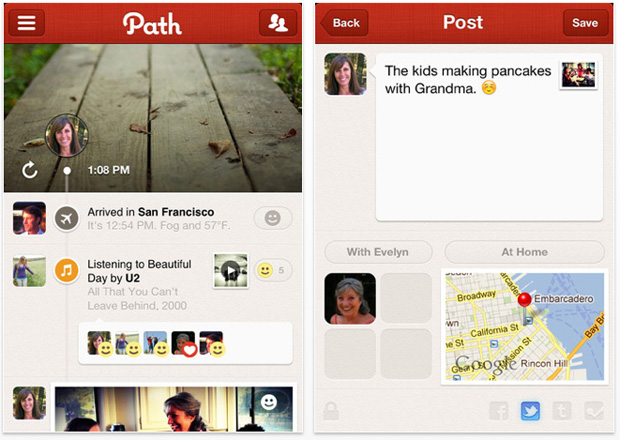 The Path mobile application was re-launched back in December as Path 2 and has since become increasingly popular among iPhone users. It’s meant to be a simple way to share key moments of your life, through photos, videos, thoughts and locations. According to the website, you should think of it as a personal journal or “path” through your life. That admittedly all sounds a bit twee, but it’s a much nicer way of putting it than a rather clinical timeline (we’re looking at you Facebook, obviously). However, the thing that most users have found so appealing about Path, is that you only share all of this information with up to 150 friends, making it feel a little more personal than the likes of Facebook and Twitter.

Everything seemed to be going so well for Path until today, as it’s been revealed that Path 2 has been uploading your personal details and contact information from your address book onto its servers. Oops.

According to CultofMac, a developer called Arun Thampi recently realised all of his contacts were being sent to the Path servers:

“I noticed that my entire address book (including full names, emails and phone numbers) was being sent as a plist to Path. Now I don’t remember having given permission to Path to access my address book and send its contents to its servers, so I created a completely new “Path” and repeated the experiment and I got the same result – my address book was in Path’s hands.”

OK, that makes sense. But why wasn’t anyone asked first?! I don’t have any huge issue with an app seeing my contacts like many others seem to, but it would have been so much better in the long run to ask users to opt-in before they went fishing around in all of our private stuff.