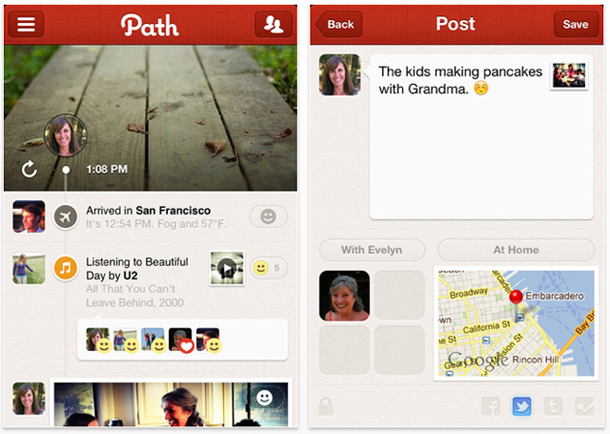 If a quirky little sharing app called Path rings a bell that’s because it launched in November of last year. In fact, search within the depths of your phone, you may have even already signed up to it and then quickly forgotten about it moments later.

Well it seems you weren’t alone, some have been using it obsessively but many jumped on the band wagon and haven’t touched it since. Until now that is.

So what is it?

It’s meant to be a simple way to share key moments of your life, through photos, videos, thoughts and locations. According to the website, you should think of it as a personal journal or “path” through your life. That admittedly all sounds a bit twee, but it’s a much nicer way of putting it than a rather clinical timeline (we’re looking at you Facebook, obviously).

What makes it different?

Most of the social networks we use at the moment are obsessed with making us share everything with everyone, but Path is different in that it wants you to only share important things with a select few.

Obviously there’s a way to share content through to other networks too if you’d like, which isn’t the aim of the app, but is a useful addition as it might ease people slowly into the world of Path.

Interestingly, you don’t just comment and like either, there are a few emotions, like smile, gasp and frown to play around with. We’re not sure whether we love or hate this idea quite yet.

Although you can share other kinds of content, Path is very image focused. You can add a cover photo at the top of your path too, a bit like your Facebook timeline and you can add filters to your photos too, ideal for Instagram lovers.

Why should we care?

Although Path has been around a while, it’s recently been re-launched and revamped as Path 2, which changed its focus from just sharing photos to sharing everything. According to Techcrunch, since the relaunch the app has gone from 10K to 300K users in two and a half weeks. Now that’s a feat and proves that Path has certainly caught a lot of people’s attention.

Path isn’t going to be a replacement for Facebook, but it could definitely have a lot of potential and it’s good to see a social network focused on being social with those that matter, not just anyone and everyone.

The great thing about Path is we don’t imagine it’ll be the same for every user or even every group of friends, people will undoubtedly start using it in different ways, which will be really interesting to watch develop.

Available for both iPhone and Android devices for free.