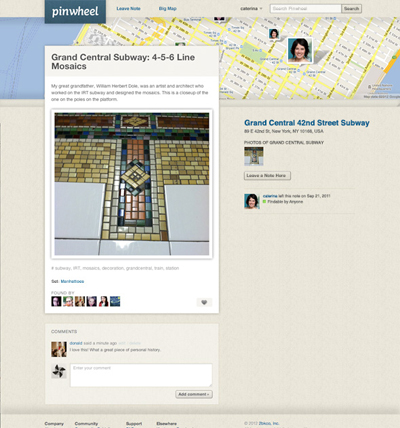 Caterina Fake is one interesting online entrepreneur, she co-founded photo management website Flickr and online taste graph Hunch and she’s involved in a whole range of other exciting sites, projects and ventures. Her latest startup is called Pinwheel and although it’s only just launched in private beta this week, we’re pretty excited about what it has to offer…

Pinwheel is basically a way of leaving notes and other kinds of content at certain locations. We’re going to hand over to Caterina here, as she explains Pinwheel better than we could on her blog:

“On Pinwheel you can find and leave notes all around the world. The notes can be public or private, shared with an individual, a group or everyone. They can be organized into sets, such as, say, the “Tales from the Road: KISS’s 1974 Hotter Than Hell Tour”, “Best Spots for Butterfly Hunting”, “Every place that you told me that you loved me, circa 2008″ or “Find me a Nearby Toilet NOW”. You can follow people, places and sets. And in the future, you will get notifications on your phone from who and what you choose. Following sets is useful, because that friend of yours with the great taste in coffee shops may also have an unhealthy obsession with, say, 1970s glam metal band KISS, and frankly, in childhood you were traumatized by a photograph of Gene Simmons and don’t need to repeat that in your dotage.”

Fake points out that it doesn’t have to be boring content like “this place is awesome”, users have reportedly already been saving poems, jokes, photos, postcards and quirky objects they’ve found, so it really seems like a platform (or site, or app, we’re not entirely sure what we call it) that you can use in any way you please.

Interestingly, Fake explains that Pinwheel will eventually make money by inviting businesses to make sponsored notes, so it’s good to know there’s a plan in mind for the future that hopefully won’t impact too much on users’ experience of the app.

To sign up to the private beta version of the site check out Pinwheel here.