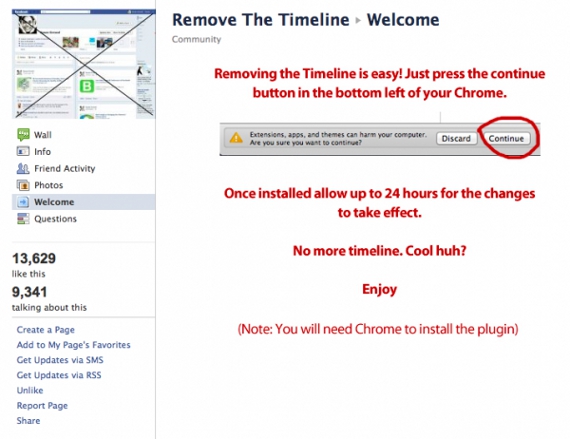 It’s no surprise that every time Facebook changes a feature, introduces a new layout or tweaks privacy settings that a large number of users get very angry. After all, many of us use the social network everyday and these new features are irritating, time consuming to get our heads around and most importantly, human beings just don’t seem to like change. Ever.

So, Facebook’s recent (pretty significant) overhaul of profiles, which sees them being replaced by timelines, has caused an uproar among disgruntled users who just want things back to the way they were in the good ol’ days.

Many of these users have formed timeline hating groups and they’re actively commenting on every blog post they can find to do with the new features to show their disgust. However, some are also turning to bogus services, which promise to remove the timeline and all mentions of it for good, but at a price. According to All Facebook, there are more than 16 timeline-related scams circulating at the moment that could be forcing users to download content, invite friends, watch videos and download malicious files.

The problem seems to be that nowhere on Facebook’s help pages or blog does it say that once you’ve activated the timeline you can’t revert back to the old profile, which is presumably why so many people are actively looking to these kinds of bogus solutions.

As far as we know there’s been no official word from Facebook about whether the new timeline will become mandatory for everyone in the next few months. At the moment it’s optional and users have seven days to review it and make sure they really want it before they’re stuck with it for good.

Here at Shiny Shiny we like the new layout and think the timeline is interesting, looks better and allows us to stalk our friends with ease. However, that may just be because we know standing up to Facebook’s decisions rarely results in any of us getting what we really want, so it’s best to just embrace the changes.