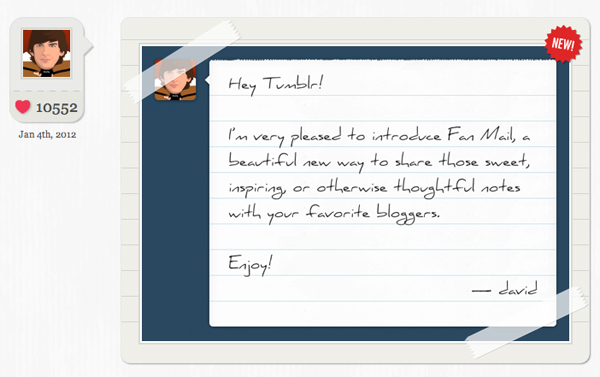 Over the next few days the quick, fun and easy blogging service Tumblr will be rolling out a new private messaging system to its users called Fan Mail, according to the platform’s official staff blog.

The new system will allow users to send private messages to other Tumblr bloggers (or Tumbloggers, we’re never sure), which they can then retrieve from the top corner of followed blogs, in avatar menus and within their Tumblr inbox.

Users have always been able to ‘ask’ other users things, but these messages were sent via a public email address and often just prompted questions and small snippets rather than longer messages.

It seems the messages may also have customisable formats too and look like quirky handwritten notes, which is a nice touch.

Some users have received a message from Tumblr’s CEO David Karp about the new system already, which reads:

It seems like a positive and necessary step from Tumblr to introduce a new messaging system that allows bloggers to interact with each other privately and directly. Not only will it increase engagement among different users, but it makes Tumblr seem like even more of a community and less of a blogging platform. However, we’re not sure every private message shared will be “sweet” and “inspiring” like Karp suggests. We presume in the future there’ll need to be strict ways for Tumblr to police spam or abusive messages, which aren’t nice but unfortunately are commonplace online, even in the jolly little world of Tumblr.