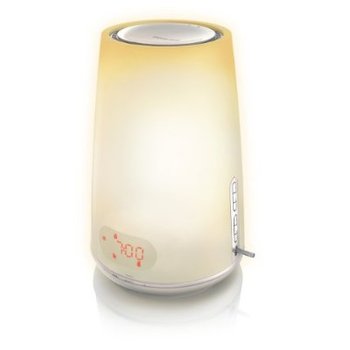 Getting up at this time of year is tough – at least if you live in the UK or northern Europe. In London it doesn’t get light until around 7.30am, which isn’t great if your boss likes you to work in the mornings or you have to get out to walk the dog before he pees on the floor!

Enter the snappily titled Philips HF3485 wake up light. It’s been designed to help those 2 million people in the UK and Ireland who, according to SAD.org.uk suffer from Seasonal Affective Disorder (SAD) – a medical condition known to reduce energy levels, even cause depression, as a result of light deficiency.

‘SAD’ lights have now been around for a little while, but most of these are purely lamps that you switch on and off to inject a bit of artificial sunlight into your life. They are great, especially for those who work in dark offices where there isn’t much, if any, natural light.

This latest model, however, is more like a ‘new age’ alarm clock in that it combines all of the functionality of a SAD lamp with the traditional functions of an alarm clock radio. And while the lamp isn’t the brightest around (up to 250 lux), it is pretty good at getting you going in the mornings thanks to a number of innovative, if somewhat quirky, features. 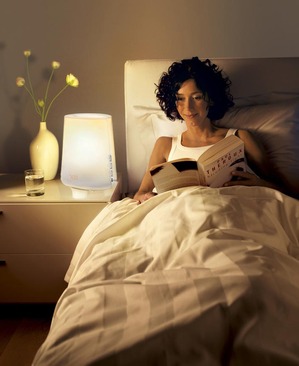 Unlike a conventional alarm clock or even mobile phone which relies on an earth-shattering sound like a fog horn to blast you out of your slumbers, the Philips wake up light does things in a slightly more civilised way.

The ‘sunrise’ mode means that the light comes on gently around half an hour before you need to get up by gradually increasing its intensity until you wake up naturally – much like you would if the sun shone in through the curtains. Then if you are still not awake after the sunrise period (this can be adjusted between 20 and 40 minutes), the alarm switches on.

Wake up, face the moo-sic

But this is no ordinary alarm, no sir-ee. Instead it’s one that will play you various sounds like a cow mooing in the field or birds tweeting in the forest, both of which are clearly very authentic for life in the London suburbs!

Alternatively, if you like your alarm clocks a bit more old skool, there’s an FM (not DAB) tuner to wake you up or you can listen to music from a USB stick as long as it’s encoded in the MP3 or WMA formats (Apple’s standard AAC format isn’t supported so you may need to convert your iTunes library.)

Another option is to download various wake up tones from Philips’s website here. These are grouped into various themes such as ‘Waking up in the city’ and ‘Waking up in nature’ and include tones with names like ‘rainforest’, ‘morning in a monastery’ and ‘lazy Sunday morning’. All sound like good fun.

For those who like to fall asleep with the light on there’s also a Sunset mode which operates a bit like the Sunrise mode in reverse, except of course the alarm doesn’t come on just as you are nodding off! Instead the light gently dims in stages to suit those who like to drift off to sleep reading a book at bedtime.

So is the Philips wake up light worth buying? Well yes it’s pretty good, actually. The lamp isn’t as powerful as some we have tested, but it’s good enough in most bedroom environments. And while it’s a shame the radio is FM, rather than DAB, that’s not going to bother most people – except BBC Radio 6 Music fans maybe.

My only slight criticism is that it is difficult to set up. The menus are slightly fiddly and it could really do with a remote control. However, once you’ve programmed the time, alarms and FM radio stations, the HF3485 is straightforward enough. There’s a handy lever button on the side for toggling between the two built-in alarms and separate buttons to control the radio and change the intensity of the light (betweeen 1 and 20).

If you really aren’t a morning person then this wake up light is perfect. Even if you are a morning person, it should help increase your energy hormones and give you an added spring in your step to help you through these dark winter days. Recommended.

For more information go to the Philips website here. The recommended sale price is £132.77, but currently on special offer on Amazon for £84.99 (including free delivery).