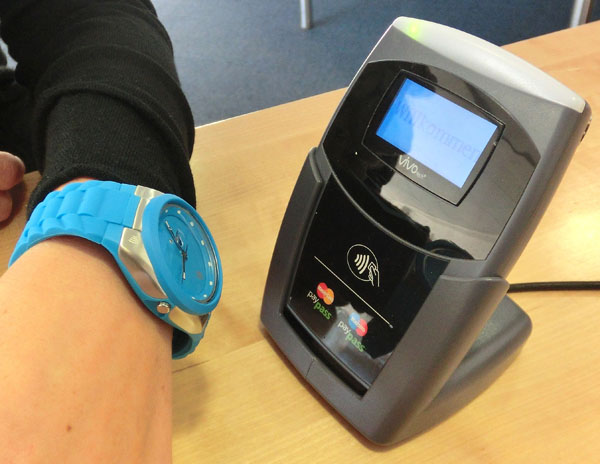 Both Starbucks and Paypal are pioneering new ways to let you pay for food and drink with your mobile phone, many retailers are now allowing you to tap your credit card on a contactless reader rather than entering a pin and the world of tech just can’t shut up about NFC technology. So will we all be paying for things with taps, swipes and mobiles rather than cash, cards and PIN numbers very soon?

Well we’re really not sure, but we do love the slightly different approach from Watch2pay, because instead of being preoccupied with adding contactless payments to our credit cards and mobile phones, the service gives us that same kind of technology inside a wrist watch.

Developed from a partnership between watch manufacturer LAKS and MasterCard, Watch2pay allows users in the UK to tap their snazzy new watch against a contactless reader, which you’ll apparently find in more than 70,000 UK retailers, without the need to hand over cash, a card or even enter a PIN number.

Yes they’re very clever, but obviously we’re excited about the fact they come in a range of bright and zingy shades too, there are currently eight different colours available and we have our eyes on the red one.

It’s hard to say whether the whole contactless payment revolution is going to be groundbreaking or disappointing, especially when a load of colourful watches are at the forefront here in the UK. The safety issue also worries us a bit, so if someone took our watch or phone they’d have access to our wallets? Isn’t that the reason PIN numbers were invented? Maybe we’re just being a bit old-fashioned and like many we’re not willing to part with our wallets and pennies quite yet.

Do you think contactless payment is the way forward or have you got a firm grip on that lovely leather wallet of yours?

The watches are available from Watch2pay for £99.

One thought on “Watch2pay brings your wallet to your wrist”