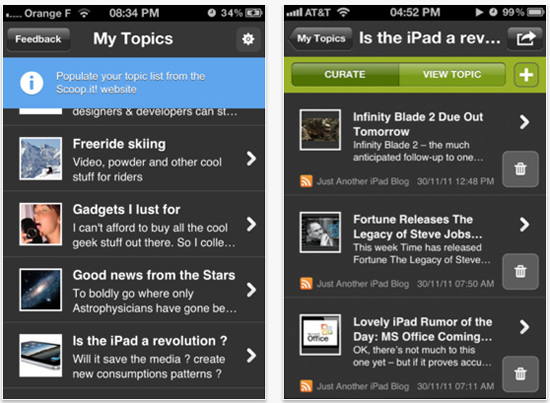 We’ve come across all kinds of apps in the past year or so that aggregate important content from news sites, blogs and publications as well as your own social networks. Now a new application called Scoop.it (which works with the Scoop.it web service) allows you to curate your own digital magazine instead of reading the content from other sites and blogs.

Users can collect content from around the web based on specific topics or interests and then publish it in a magazine-like format to be saved, shared and read elsewhere.

There are similar apps that let you do the same kind of thing, such as deciding on different streams with Taptu, but this is the only app we’ve seen that lets you then go on to create/curate your own digital magazine, which can then be shared with others after.

It seems a bit strange that the intro video to Scoop.it suggests that because the web is such a crowded place, instead of creating our own content we should maybe just curate what’s already out there. This begs the question, is it OK to be collecting together other people’s work in our own magazine, even if we credit them? It’s a nice idea in theory and would be good for those who want to just read and use the magazines they’ve created themselves, but there are much better ways of collecting together bits and pieces from the web that interest you without it looking a bit too much like you’re ripping other people off.