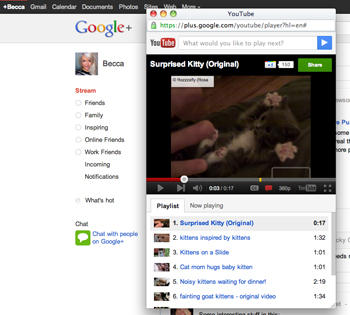 Google has just announced that there’ll now be much more integration between video treasure trove YouTube and the social network we keep forgetting about, Google+.

Just take a quick look at your Google+ news stream now and on the right hand side you’ll see a little YouTube icon. Hover over it and the icon turns into a little ‘slider’, which considerately asks “What would you like to play?”. You can then put anything in there, like an artist or topic (we suggest “sloths”, “kittens” or “Tom Hardy”) and then it’ll start playing a list of related videos in a pop-up. How handy.

You can then share the videos you find with your circles if you like, and when they click on the video you’ve shared they can also see a related playlist too, which is a neat little addition. These YouTube playlists will also start to appear in Google+ search results too.

Now admit it, we’ve all signed up to Google+ and we all “get” it. But, apart from a few users who’ve taken to it really well, there’s still something that makes us forget about it everyday and still bore our Twitter and Facebook friends with mundane updates instead. So, maybe further integration with YouTube and a few cool new sharing options will at least draw video lovers in a little further.

One thought on “Will cool YouTube integration make us care about Google+ again?”