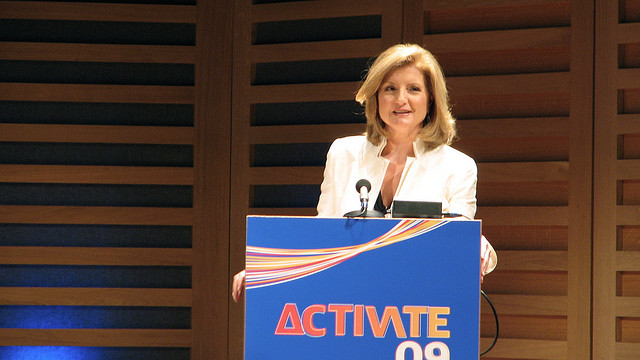 If you’re looking for some inspiration to kick start your online business or need a dose of motivation to persevere with a new blogging project, then take a look at our pick of ten inspiring female entrepreneurs who between them have started blogging networks, pioneered some of the most popular websites in the world and played a key role in how the tech industry has evolved over the past ten years.

Krista Madden founded popular female lifestyle website Beauty and the Dirt back in 2000 and came across a number of websites which were unable to make money on their own, so she began hand-picking websites to create a network, which formed Handpicked Media, a way to represent sites for advertising sales. Handpicked Media is now a collective of independent websites and blogs, covering beauty, fashion, parenting, culture and food.

As well as being a successful online entrepreneur, Madden has also set up a beauty salon in the West End called The Beauty Lounge.

Sheryl Sandberg is an entrepreneur based in the US who is currently working as the chief operating officer of Facebook. Before she moved to the social network she worked as the Vice President of Global Online Sales and Operations at Google. Sandberg has played a large part in Facebook’s continued success and has overseen many areas of the business over the years, including sales, marketing, business development, human resources and communications.

Shaa Wasmund is an online entrepreneur and one of the founders of a support network for businesses called Smarta.com, which provides a platform for all kinds of businesses and entrepreneurs to learn from one another, make connections and ultimately be as successful as possible. Wasmund has also recently written a motivational book called Stop Talking, Start Doing, which inspires people to take control of their lives and begin the necessary steps to start making their dreams a reality.

Sophie Cornish co-founded popular shopping website notonthehighstreet.com with her friend Holly Tucker back in 2006, which features the bespoke products of small businesses and crafts people. The website currently works with over 1,600 small business partners who sell over 35,000 products between them and last year had a turnover of £15 million.

Arianna Huffington is both the president and editor-in-chief of the AOL Huffington Post Media Group. Back in 2005 she launched The Huffington Post, a news blog which quickly became one of the most popular websites in the world.

Martha Lane Fox co-founded travel and gift e-commerce website lastminute.com and now works as the UK’s Digital Champion attempting to get people online who have never used the internet before.

Fox is also a non-executive at a number of large brands, including M&S, C4 and Mydeco.com.

Gina Trapani is a coder and blogger who has been involved in multiple ventures over the past few years and currently works as a project director at Expert Labs, although she’s renowned for being the founder of popular, quirky lifestyle blog, Lifehacker. She is currently working on a number of new projects, including ThinkUp, a web-based platform for crowdsourcing insights on social networks like Twitter and Facebook.

Natalie Massenet worked as the editor of Women’s Wear Daily and Tatler before she started up luxury fashion website Net-a-Porter in 1998. In 2010 she sold the extremely successful website for £50 million but remains an executive chairman of the business. She has recently set up Mr Porter, a spin-off website aimed at men.

Susanna Scott is a popular blogger at A Modern Mother and founded the hugely successful BritMums social network, which has more than 3,000 members and runs all kinds of blogger engagement programmes, events and a dedicated conference called BritMums LIve!.

Caterina Fake is an online entrepreneur who co-founded photo sharing service Flickr, as well as Hunch.com, a platform which is attempting to build a ‘taste graph’ of the internet and lets you share things you like and receive recommendations. After Flickr was acquired by Yahoo in 2005, she ran the company’s Technology Development group.

She has won a number of awards and was named in BusinessWeek’s Best Leaders of 2005, Fast Company’s Fast 50 and she was also named in Time Magazine’s list of the world’s 100 most influential people.