There have been rumours circulating for some time now that the hacking collective Anonymous (or at least people claiming to be aligned with the now infamous group), are planning something big for tomorrow, the 5th of November or Bonfire Night / Guy Fawkes Night here in the UK. 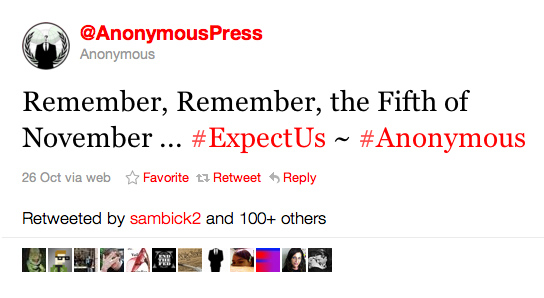 Which then led to this response by @CO11MetPolice, a branch of the Metropolitan Police in London: 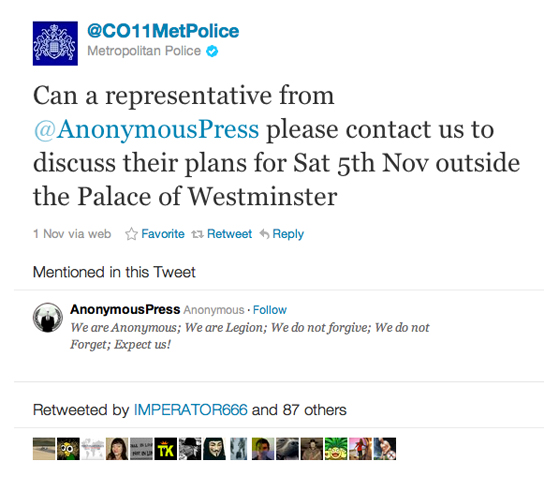 And then @CO11MetPolice strangely just tweet this about protesting permission: 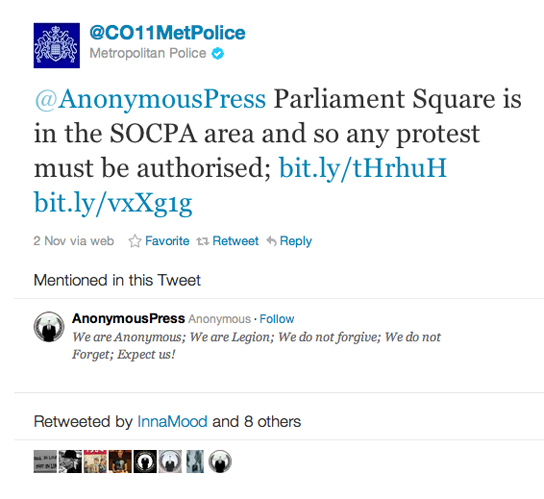 It’s very interesting to see the police approach the hackers in this way and we’re dying to know whether any more dialogue took place in private, although we don’t think that’s Anonymous’ style.

As we may never find out, here are the two main rumours we’ve come across on Twitter and in the tech press in recent weeks about what may happen as the clock strikes midnight.

As the police felt it necessary to contact Anonymous representatives in such a public and direct way, there could perhaps be some kind of ‘event’ taking place in London in line with the recent Occupy London protests, which the hacking group has been supporting.

As the group is very anti-Facebook it’d come as no surprise if there was some attempt to take down the social network over the weekend. According to ZDNet, a number of Twitter accounts have been set up alluding to “Operation Facebook”, such as @FacebookOp and @OP_Facebook, but the larger accounts that we’ve always associated with Anonymous have been claiming that they don’t support these claims.

It’s hard to speculate about what may or may not happen when it comes to Anonymous’ actions, as it’s not a group of people sat in an office somewhere all scheming like Bond villains. Instead they’re an elusive “collective” who often come together for certain causes, but in many ways still exist as individual entities.

One thought on “What does Anonymous have planned for Facebook on the 5th of November?”