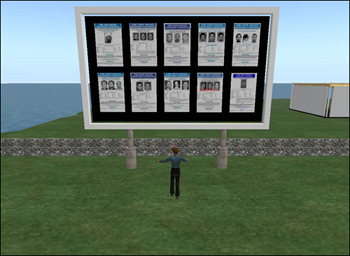 The FBI has recently decided that Second Life is NOT just about innocent escapism and virtual sex, but instead it could well be a breeding ground for gang crime and lots of other unsavoury and highly illegal activities.

According to Kotaku, in the FBI’s latest “National Gang Threat Assessment” report, Second Life gets a big mention as a possible environment for gang-related crime, propaganda spreading and even drug trafficking:

“Second Life is a computer-based virtual world with a simulated environment where users inhabit and interact via avatars, or graphical rep- resentations the virtual world may depict a real world or a fantasy world. Users communicate through text-chat and real-time voice-based chat. Second Life provides versatility and ano- nymity and allows for covert communications. Because of its anonymity and versatility, gang members could potentially use second life to recruit, spread propaganda, commit other crimes such as drug trafficking, and receive training for real-world criminal operations.”

Of course Second Life has long been on the FBI’s radar, back in 2009 it began displaying billboards and posters in the virtual world with information about its Ten Most Wanted fugitive list, the wanted posters of cyber criminals as well as details about how to get in touch with the Internet Crime Complaint Center.