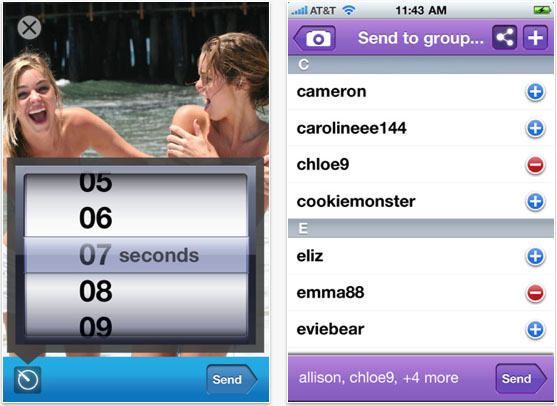 This week a number of sneaky publications published some rather NSFW photos (allegedly) of the lovely Scarlett Johansson. Now it’s not been confirmed yet how they got their hands on the images, with some suggesting her phone had been hacked and others claiming the lucky recipient passed them on.

However, regardless of how Scarlett’s personal bank of naughty shots got into the public domain, there’s no denying this is becoming a bit of an issue among hot celebrity women nowadays. Only a few months ago similar photos surfaced that looked very much like Blake Lively, something her reps still seem to be denying.

So what’s the solution?

Obviously it can’t be that these celebrities just STOP taking photos of themselves, they’re pretty, rich and live in Hollywood, of course they need other people to see their nakedness. So we think we may have found something that’ll help them send these photos without getting caught instead.

The Picaboo app allows you to send photos to your contacts, but you control how long they see them for. So, to be safe, simply take a photo of yourself (with or without clothes, your choice) and set the timer to five seconds. The photo will then be sent to the contact of your choice but once they’ve looked at it for five seconds it will then disappear FOREVER.

Oh and don’t come running to us if a tabloid publishes images of your bits and pieces over the weekend, the safest way to stop them getting into the wrong hands would be NOT TO TAKE THEM.

Picaboo is available from iTunes for Free.