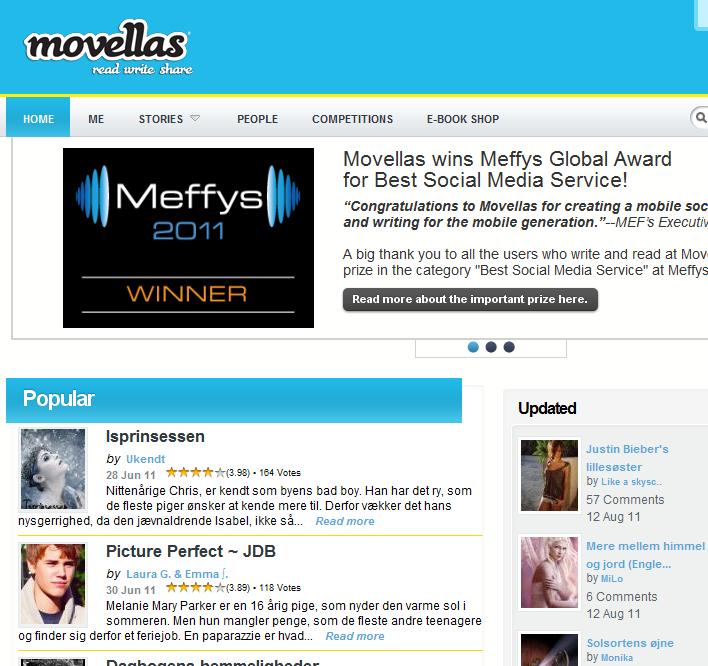 Hard at work on your novel? Angling for a book deal? Well now there’s another place online where you can share your wise words with others. Movellas is a Danish based start up that has expanded its offering to include English language books. The format is simple – you write your novel – or at least part of it – upload it to the site and then share it with others on the site as well letting all your friends know via Twitter and Facebook.

It is not a new idea. In fact you can also upload your wise words to Figment, Protagonize, WeBook and WritersCafe too. Or there’s also Amazon’s self-publishing options too and Lulu also has an ebook facility.

The big question though is whether publishing your book online or creating an ebook will ever mean that your book is read by more than just a few like-minded literary fans. There are of course some very high profile examples of authors who hit the big time after self-publishing. Amanda Hocking’s sold millions of ebook via Amazon which ultimately lead to her securing a big money deal with an established publisher. Similarly thriller writer John Locke recently announced he had sold over a million ebooks via Amazon and then produced another ebook, How I Sold 1 Million eBooks, to explain how he did it.

The bit that must start to worry the publishing industry is the plans of writers like Barry Eisler,who turned down a six-figure contract earlier this year as he felt he would make momnoey and have more flexibility if he published the books himself.

Eisler won’t be the last either. There is something very attractive about not having to pay money to agents and publishers while at the same time not having someone pushing you to finish a book.

Which brings us neatly back to Movellas and its rivals. I do think it could turn into a kind of MySpace for books. That means two positive things. Firstly anyone who has an idea and can string a sentence together can share their content in the same way that bands do/used to do on MySpace, which is great as it gives would be writers a platform for their work. The sites then might yield a few high profile success stories as publishers pick up on new talent. Perhaps more likely will be people developing ideas and then self-publishing successful ebooks.

The book industry not surprisingly remains sceptical about self-publishing. One of the big criticisms of the format is that it negates the opportunity for an editor to brush up the author’s manuscript. This is standard practice within the industry and I am sure that many thousand of novels have been massively improved in this way.

However what about the wisdom of the crowds. Could sites like Movellas mean that readers help shape the work of aspiring novelists? In some ways no one knows better than what is likely to sell and how books can be improved than by people who are likely to buy the books themselves.