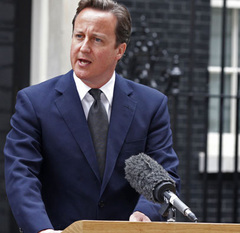 Oh that’s fine then! Only people who use social media “for ill” will get their accounts shut down by the government.

Great. Some great policy-making from David Cameron today in his speech condemning the riots. His idea to crack down on social networks during times of social unrest has caused outrage on Twitter. And also bewilderment. It’s a true clash of the 1.0 government with their 2.0 citizenry.

How the hell do you decide who is using social media “for ill”?

a) Technically that’s a massive challenge since there’s a fire-hose of information out there. Do you have to parse *everybody’s* facebook chats and blackberry messages?

b) What are you searching them for? The word “violence”? the word “riot”? The words “let’s meet up at Enfield town centre”. (What if people want to meet up in Enfield to go to the cinema?)

Let’s hope this is just empty word-mongering. God knows the police will have enough on their hands without having to read everybody’s BBM chats.

Will they just go for people who list “rioting” and “anarchistic violence” in their Facebook interests section?

How will they do this without alienating the huge section of the population who use social networks for simple fun and communication.

“Mr Speaker, everyone watching these horrific actions will be stuck by how they were organised via social media. Free flow of information can be used for good. But it can also be used for ill. And when people are using social media for violence we need to stop them.
“So we are working with the Police, the intelligence services and industry to look at whether it would be right to stop people communicating via these websites and services when we know they are plotting violence, disorder and criminality. I have also asked the police if they need any other new powers.”