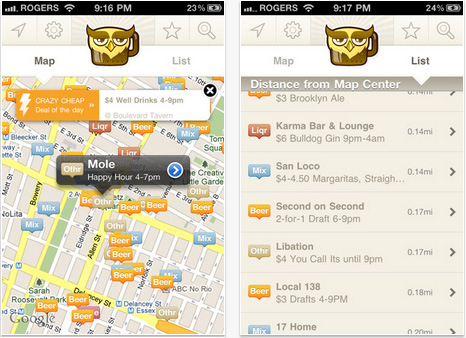 Sometimes you have a friend with an encyclopaedic knowledge of local bar happy hours and drinks deals. But sometimes you don’t. Sometimes you want a cheap cocktail but don’t know where to find one. Drinkowl is an iPhone/Android and Blackberry app which catalogues drinks deals around you.

It’s ideal app material because it’s the sort of thing you can’t easily Google for. It’s all displayed nicely and easily on a map.

For example I can find out that near me right now, Oxygen bar is offering £3.50 Mojitos 3-8pm and that beers are 2-for-1 down the road from 2pm. That’s this afternoon sorted then.

You can also plan in advance: viewing deals for any day of the week. Handy. Events and coupons are coming soon.

DrinkOwl is from a Canadian company based in Toronto. It has 150 000 users and after launching in cities in north America, it now runs in London too. They’re looking into deals with alcohol brands according to their Marketing guy who emailled me – so we guess that’s the way they’re looking to monetise.

Apps that deal with coupons and money-off vouchers are smart – and are doing well this economic climate of ours. And alcohol sales always do well too.