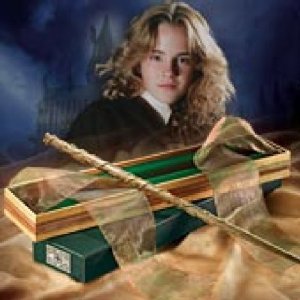 One of the saddest things in our society at the moment, and it has some pretty serious competition, is the way that large movie franchises are oblivious to the fact we are in the midst of austere times and continue to fleece parents. Buy anything for a small child that has appeared in a film and you can be sure you’ll be coughing up quite a premium for the privilege.

Somehow though I thought that Harry Potter, with its environmentally-conscious actors and socially progressive writer, might be different. How wrong was I? In fact when it comes to massively overpricing toys from the film Harry is just wizard.

Exhibit A is this reasonably new Hermione Granger wand. It is the type of thing that the film’s younger fans simply must have and I know this from painful personal experience. So a wand that’s a bit of nicely moulded plastic with a light at the end in a presentation box that can’t be too expensive right? £10-15 would be ok. £20, well those bulbs can be a tad pricey, but any more would be a bit of a ripoff. Well I can imagine that Dumbeldore is probably turning in his grave because the Hermione Granger wand currently retails in Hamleys for – get this – £36! It is cheaper online too, but not by much.

I honestly can’t believe that the wand itself cost more than £1 to manufacture and, sure the box is quite attractive, but £36! Is that all going on profit for the manufacturers Noble (company strapline: Uncompromising Value)? Or is it because the film company Warner Brothers charges Noble ridiculous amounts to licence the product? We really need to know.

Ultimately I think this reflects very badly on JK Rowling. She seems like a lovely person and her Who Do You Think You Are? programme on TV the other night portrayed a sensitive intelligent and wonderfully warm woman. How she (and Emma Watson for that matter) can sanction this kind of rip-off (I’d like to think that have no idea this is going on) is beyond me.

One thought on “The great Harry Potter rip-off”