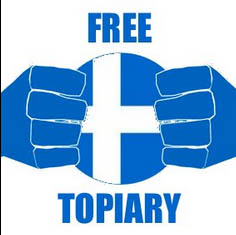 Looks like the Americans will have to deal with a bunch of angry Scots if they want to extradite Jake Davis, the 18 year old from the Shetlands who acted as the frontman for hacking group LulzSec in their attacks on Sony, Fox News and The Sun.

Davis from Yell (one of the northernmost islands in the Shetlands) was arrested by British police last Wednesday and has been questioned in Scotland Yard. His name was released last night and he will be charged with five counts this morning including breaking the Misuse of Computers Act and encouraging people to break the Serious Crime act.

He has been picked up as a bit of a Scottish hero with supporters of Topiary have created the Facebook page Free Topiary decorated with a Scottish flag version of the goatse – a pretty horrible internet meme involving a stretched sphincter. That’s it up there.

According to blogs he was an online chess fanatatic – and a “quiet, clever” boy who had become withdrawn and afraid of open spaces when a family member died when he was in his early teens. One supporter said:

“Obviously, Jake’s persona appears to be much more powerful than the description his family and schoolmates are giving. All this about “getting the wrong guy” appears to be a pretty transparent joke that I’m sure Jake would find hilarious. The Jester and the Web Ninjas are no source to be trusted, and no sane person seems to have any good evidence refuting Jake Davis as Topiary.

“It may seem a bit counter-intuitive that a loner would have such a dominant online presence, but to me it makes sense. Having lived in a remote small town, having suffered from the same kind of withdrawal – I identify with Jake. I can’t see how anyone else could be Topiary. He was my trolling friend, and I miss him.”

Some of the charges he is facing could result in a 10 year sentence. It’s possible that the American police will be interested in him because some of the LulzSec hacks were committed against American companies.

Some members of LulzSec still claim that the police have arrested the wrong Topiary.