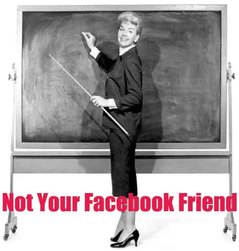 It’s never been a great idea for teachers to be Facebook friends with their pupils – if you don’t want Class 7F looking at your student holiday pictures that is – but it has now been banned by law in the US state of Missouri.

The Facebook friendship ban is part of the “Amy Hestir Student Protection Act” a set of laws in Missouri passed to protect children from inappropriate relationships, named after a student who was molested by a teacher several decades ago.

The ruling – that teachers cannot have private connections with students on websites – rules out all social networks with a private section.

Even Twitter would not be allowed because it opens the possibility of sending private Direct Messages. Interaction on public sites is fine- so conversations on educational web portals and suchlike are all legit because the child’s guardian and other authorities would be able to monitor those pages.

According to PCMag Some teachers are against the ruling because they think it will take away a useful way for pupils to contact their teachers:

“even that provision isn’t sitting well with Missouri teachers who maintain that Facebook is a valuable tool for students that might otherwise feel uncomfortable bringing up issues in a face-to-face setting.”