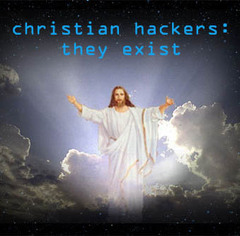 Breaking bread isn’t something you’d expect a bunch of hackers to do on a meet-up day. More like breaking CODE right? But we’re talking about Christian hackers and these guys like to err Break the Bread together when they meet up to hack code and praise the Lord.

It’s real. Look at this blog post describing a meet up a couple of months ago – April 2011:

“This event exists for the sole purpose for the Glory of God, and the fellowship of Christian hackers. The plan is simple: At Defcon 19, we break bread together in remembrance of Him.

“This event serves as an opportunity to meet fellow Christian hackers at the end of a conference many of us attend.”

Of course there’s no reason why hackers shouldn’t be Christians. Hackers don’t have to be pimply teenage boys with social problems (cf Ryan Cleary). They can be middle-aged women as we discussed the other day, and of course they can be men and women of faith too.

They’re just people who like fiddling around with code, motivated by the desire to change stuff around.

What’s interesting to me about this is that the event specifically combines the Christian bit and the hacker bit. Is there an overlap? Do Christians hack differently than non-Christians? Can you hack for the Lord?

We found it on the blog of Pinvoke who writes that he is a husband/father, a Christian and a “haXory Type”. We’ll send him a little email to ask some more questions.

If I were to draw a GENERAL CONCLUSION from this, I’d say that it shows that hacking and information control will be the big battleground of the next decade and that niche interest groups are increasingly making moves to be represented in there.

UPDATED 1/08/2011
We got a nice email back from Andrew Wilson who organised the Meet-Up we quoted above. He explained a bit more about the Christian hacker ethos:

“Christian hackers have been around for quite some time, as likely, so have many other hackers who hold religious beliefs important in their lives. The organization “Christian Hackers” (www.christianhacker.org) has also been around for some time now, as a network of friends, and as a means of outreach to the community itself. I am not sure if that equates to “taken off” but there are quite a bit of us in this. Most notably, of course, is Johnny Long.

“As far as lifestyle goes, I am comfortable speaking for others: Christ is our identity– not security, hacking, and or infosec. Most all of us are professionals with in this industry, working to better the place with our various gifts. As Christians, our actions should always strive to be a reflection of Christ himself– so how we do business and give of ourselves is intrinsically different in it’s motivation. But at a technical level, there are no differences.”

“Hacking is not, in and of itself, a negative thing. It’s often expressed as the curiosity of finding out how something works and modifying it for improvements or even to expose weaknesses (also for the sake of improvement). It’s when people do this for their own profit at the expense of others (attackers / criminals) that it becomes negative. I would say the blackhat / attacker world is incompatible, but being a professional tinkerer is not.”