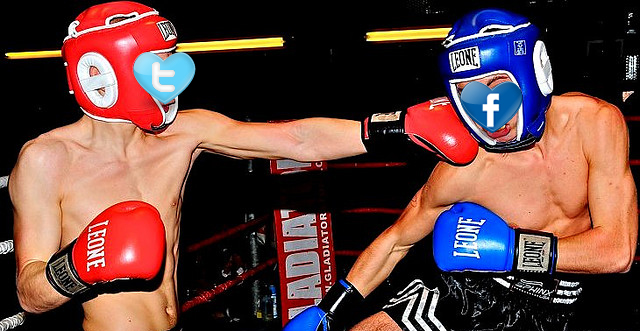 Unless our daily social media intake suddenly starts to get rationed, which in light of recent events isn’t that hard to imagine, then it’s not a decision anyone would have to make any time soon, but what if you did have to choose just one, FOREVER?

Granted some people prefer LinkedIn to Twitter and claim it’s much more than just a business network and an increasing number of users are getting to grips with Google+ and ignoring Facebook, but I think if we monitored everyone’s time 1984-style, then most people would still log onto Facebook and Twitter over the rest. On the whole anyway. Plus I’m REALLY sick of Facebook vs. Google+ posts.

So imagine the scene, Zuckerberg in one corner of the ring and the big, blue, faceless Twitter bird in the other (which in actual fact is called Larry). Who’s going to win?

Now although there have been thousands of versus posts pitting these two against each other since Twitter was first launched, the truth is they’re extremely different in many, many ways.

So instead of comparing specific features, let’s just have a look at some of the main concerns and wider topics:

This may seem like a bit of a dull one to kick us off, but the issue of privacy and how we can change settings to have more control over our personal information and everyday content is a pretty contentious issue.

Facebook has come under fire countless times in the past over issues of privacy, with many getting increasingly frustrated that every time a new feature is rolled out, all users are forced to automatically opt in. The most recent uproar has been the introduction of facial recognition to people across the globe. There were some concerns when it first came to the US last year, but it wasn’t until European countries noticed the changes that things started to really heat up, with German officials claiming it’s far too intrusive and asking the social network to remove the functionality altogether.

Having said that once you figure out all of the changes, Facebook’s settings page is pretty comprehensive, just a check list of what you do and don’t want everyone to see.

Twitter is different in many ways as it’s very much an open network. Obviously you can protect your tweets so they’re only visible to your friends, but less and less people seem to be taking that option. You can’t @ people who don’t follow you if your account is locked, which most people don’t find appealing because they wouldn’t be able to spam celebrities anymore. Sigh.

As far as settings go though, Twitter does let you control everything you need to.

Facebook has always been about the photos for me, incessantly taking them, tagging them and browsing through them. The recent “lightbox” effect seemed a little strange at first but actually makes viewing pictures much more appealing and they can now be uploaded in a higher resolution too.

Twitter has always been a handy platform when it comes to sharing photos with your followers, especially considering a lot of photo apps allow you to share straight through to Twitter via your mobile. However until now you’d have to store all of these photos within another service, like Instagram of TwitPic. UNTIL NOW. Over the past few days Twitter has been rolling out a new photo gallery functionality which displays all of the photos anyone has ever added to Twitter, whether that’s through an external service or via Twitter’s new photo tool – a tiny picture of a camera underneath the “What’s happening?” box.

Round Three: Friends and Followers

This section is really what you make of it.

If you follow thousands of people on Twitter without thinking and you’re still friends with those you hated in school on Facebook, they’re both going to be too overcrowded and, well, suck.

Both platforms have the ability to make lists and group your friends, and although that may not be as intuitive as Google+’s circles, it still makes much more sense if you can be bothered to sort through everyone.

The way Twitter handles lists seems much easier in my eyes, and you can then even manage your account through an external tool like TweetDeck to see a column dedicated to that particular list, which many would argue is the most effective way to use Twitter.

When it comes to the content your friends and followers share, that’s again down to who they are, but on the whole I think we can all agree that Twitter is often more focused on current affairs than Facebook (unless you’re following Kim Kardashian of course) and it’s much easier to see the things that interest you with the search functionality and trending topics in the sidebar. In comparison Facebook seems largely more focused on personal news and sharing, but again it really all depends…

Facebook likes to add new features and things every now and again to confuse us, but overall it’s fairly easy to get to grips with, particularly if you ignore all the fluff down the left-hand side, like apps, groups and pages – oh, just me?

Twitter does seem much more simple to use, particularly since it became “new Twitter” and did away with the old and dated design.

Round Five: Apps and External Tools

Twitter has a whole host of third party applications that let you manage your Twitter presence, like HootSuite and TweetDeck. There are also all kinds of apps that let you share information and connect with your followers, from fitness tracking apps to photo apps. Of course after the recent photo gallery addition, photo apps are tied into the Twitter offering now more than ever.

It’s much the same story with Facebook, but with more of a focus on social gaming, with apps like Farmville going from strength to strength.

Although there are lots of areas in which both platforms would tie and it’s very much down to personal preference, it seems Twitter would win. In the final round Larry would knock Zuckerberg to the floor with his wing. Just.

Briefly exploring each of the areas above has proved more than ever that although each platform has its own strengths and weaknesses, they can both be very much what you make of them and I think a large part of that comes down to who you’re following and who you’re friends with.

So which would you choose?